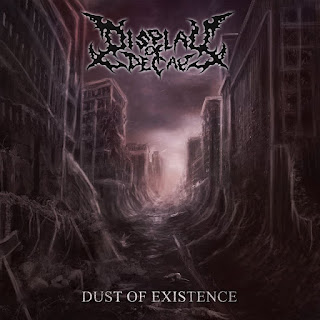 After four well received indie releases, one of Canada's most vicious death metal bands DISPLAY OF DECAY return with eight assaulting tracks and a new album 'Dust In Existence' set to be unleashed upon the world as of September 22nd. Widely noted for bringing a unique blend of old school death metal, with tinges of thrash and doom metal. The band has spread their infection across Western Canada sharing the stage alongside other elite acts such as The Faceless, Origin, Beyond Creation & more.

Formed in 2007, Display of Decay is widely noted for bringing a unique blend of old school death metal, with tinges of thrash and doom metal. Hailing from Edmonton, the band has spread their infection across Western Canada, sharing the stage alongside other elite acts such as, The Faceless, Origin, Beyond Creation & more..After four well received indie releases, DISPLAY OF DECAY is ready to unleash its next full length “Dust of Existence” that features eight aural assaulting tracks that will set the mosh pits ablaze.  Due out later this Fall 2015 with the support of a Western Canadian tour, “Dust of Existence” is a direct epilogue to their 2014 EP, “Outbreak of Infection”.
“We aimed to keep a similar style of groove on this record as we had on previous releases, with heavy punchy riffs that are near impossible to keep out of your head, but still maintain that raw edge we have become known for. With the artwork as well, we wanted it portrayed in such fashion that it plays out the story being told from the Outbreak record to this new record, which is basically a devastating virus that has been unleashed upon mankind, terrorizing and annihilating everything in its path, “Dust of Existence” is the aftermath of these events. Nothing left but scattered remains of what was once there.” comments guitarist Sean Watson.
With a few of the tracks on the record written during the “Outbreak of Infection” recording sessions, which the band felt weren’t quite ready at the time to be recorded. During this writing session for “Dust of Existence”, DISPLAY OF DECAY especially tried to make sure each and every song was very diverse from the rest of the tracks.
Watson explains.
“We didn’t want it to feel as though there was any formula or predictability going on. We find that far too many metal bands form a niche that is their “go-to” when it comes to writing, and that it becomes a predictable comfort-zone that can make a record feel as though the same track is being played from start to finish and really make the listener feel completely disengaged from what is actually being played in front of them. We like to throw whatever change-ups or fills in that I can to really make the listener that much more integrated into the tracks.”
Posted by Hammer Records at 3:47 PM