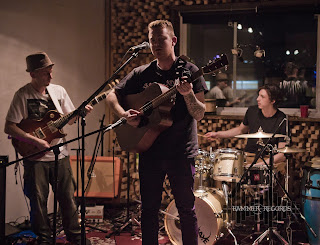 Saturday afternoon, James and I were discussing our plans for the rest of the evening when I got a phone call from a friend of mine. She was calling to invite me to attend an EP Release party Saturday night for another friend of hers’ band down somewhere off Main St. As it was also Altermind’s EP Release Show last night (hosted at Red Room Ultrabar), we had luckily just lined up Danny Sever to be in attendance there, so, I was free to say yes!

The event page was rather vague, citing no more than the basic need-to-knows; When and Where. I had absolutely no idea what kind of music I was going to see, the name of the actual band (as the event was simply titled “Jordyn’s EP Launch Party”), or whether this was going to be more of an invite-only, intimate event, or a rip-roaring, floor shaking, everyone welcome dance party! So, I hopped on transit and made my way down to the venue, which turned out to be none other than the Esher Media suite in the same building that we used to record out of years ago!

I made it just in time to get a warm welcome from my friends Brandi Sikora Williams (a talented local makeup artist) and Robbie Grenda (manager of Sedo Soul) and get acquainted with everyone else before Kengo Ito took to the stage to play his very blues inspired solo set. The event turned out to be more on the intimate rather than the crazy dance party side of things (not to say there wasn’t some dancing though). So, myself and about 20 something others packed into the live room and the show began!

There’s not a lot I can say about Kengo, other than that he has a gorgeous vocal tone, and a very rhythmic guitar style that was both calming yet exciting to listen to. Throughout the set, he switched between electric and acoustic guitar, depending on the tone of the song. Later, he also produced a harmonica, which completed his trifecta of authentic Blues. Finishing his set with a challenging cover from the 50’s, Kengo Ito was a great introduction to the level of talent I’d be hearing next.

What really helped showcase both his vocal and instrumental talent, however, was the fact that you could hear everything so clearly! It’s all too often that I attend events at a variety of venues and can’t understand a word out of the singer’s mouth, or am barely able to distinguish what guitar and bass lines are actually being played (either much too quiet, or loud in the mix). Adam and Pherbie at Esher Media were nothing short of excellent when it came to producing quality live sound.

Sedo Soul, with the line-up, Jordyn Smith (Lead Vocals, Guitar), Spencer Wilden (Drums) and Adam Baldwin (Bass), went up promptly after Kengo Ito. They launched right into a very late 90’s sounding set. (An era of music, I think, that’s due to make a mainstream comeback soon!) If I were to describe their genre, I’d say it was a mix of Rock, Pop, Alternative and Indie, yet not any one of those things individually at all. If I were to pick 4 similar artists, I’d pair them alongside Matchbox 20, SemiSonic, Ed Sheeran and Lukas Graham. The trio played a number of songs, including the three from their brand new, self-titled EP; “Prayer In The Wind,” “Breathing Without Lungs,” and my personal favourite of the night, “Shining.” Also played was a cover of Oasis’, “Wonderwall” which, although it was well done, was honestly not an unexpected choice, and a little cliche as it’s a go-to for a lot of local acts. All in all, the band was professional, personable, entertaining, and one I’m looking forward to seeing grow in our vast Vancouver Music Scene.

MARK YOUR CALENDARS!
The next time you can catch SEDO SOUL performing will be MAY 28th, 2016 at MURRAYVILLE HALL, for a Cancer Fundraiser. A good cause and good music! Make sure not to miss it and get your tickets in advanced. You can find all info and other social media links via www.SedoSoul.com

Also, be sure to check back later this week for an in-depth review of their new 3-song EP.