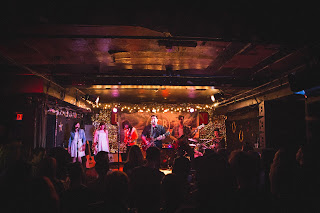 The Addington County Revue is a band full of a great mix of genres. Listening their latest album I felt some Beatles influence, mixed with choir filled country and even some heavy 70s rock and roll flavour.  This sounds like something I would have heard on the stage of Woodstock. They are coming to Canadian Music Week and I'm sure will be leaving an impression! We had a great chat with the band about their upcoming performance in Toronto.


Hammer Records: Tell us what you think of when you think Canadian Music?
The Addington County Revue: I can only speak for myself but the first thing I think of when I hear the phrase “Canadian Music” is the short film “The Log Drivers Waltz” by the NFB that would be played on TV all the time when I was a kid – but that’s because if you were a child of the 80’s/90’s that thing was burned into your soul. The visual’s capture that lumberjack identity we seem to have but that particular version of the song seems to sound like it’s from different parts of Canada – it’s got that Maritime swing mashed with some Prairie twang. Also - who doesn’t identify with a lyric like “ The log drivers waltz pleases girls completely”?
Though when I think the music of Canada I think of the bands that have had a huge influence on The Addington County Revue (ACR) like The Guess Who, The Band, The Sheepdogs and others. Like any Canadian celebrity I feel a connection to them and their music I don’t feel I have with bands from other countries. I think of the odd music community we have. Like our own national identity it’s almost impossible to put your finger on one discernable feature. Regardless of genre it’s got a really honesty to it, an earnestness which I think comes from living in a place where there isn’t much to do but stay in and play music for almost have the year.

Hammer Records: How did you get involved in Canadian Music Week?
The Addington County Revue: When we started, ACR was a band that lived in different cities, even different provinces. Once we were booking more shows we ended up in Toronto. One of the many places we’ve played was The Silver Dollar Room. The booker there, Dan is his name, took a shine to us and asked if we’d like to be a part of it.
That’s a boring answer but it’s the truth. I had a whole other thing ready to go that involved a prophecy long foretold, a mystical sword with the power to unite a kingdom and a winged moose but that’s a story everyone’s heard a thousand times already.
The other truth is that we couldn’t be more excited to be playing CMW and are just looking to putting on the best show possible.

Hammer Records: What do you have planned for Canadian Music Week?
The Addington County Revue: The thing we’re always trying to do is put on shows rather than just sets. It’s a big part of the reason we have Revue in our name. If we could afford sets and pyrotechnics you bet your ass we’d have them.
Hough to be honest we’re still getting our bearings having been asked to be a part of it. One element new to our band that we’ll be debuting at CMW is keys. We’re pretty guitar based but we’ve added organ and piano to our sound – which is something we’ve always wanted to do.
Still, you better believe we’ve got a few things up our sleeves and the only way to find out what we’ve got planned is to come see us.

Hammer Records: What message do you want to send to Canadians listening to your music?
The Addington County Revue: Other than: For God's sake please keep listening?
Not much. If you like it, listen to it. Doesn’t matter if it’s us or another band, doesn’t matter what genre of music. You gotta keep your ear to the ground in front of you. We’re fed a lot of stuff from the States it’s easy to forget we’ve got so much right here. Music is so universal that you can enjoy what’s on the radio, sure, but some of the real joy is discovering music and sounds you’ve just never heard of before. That’s what a lot of Canadian Bands offer, that’s what ACR offers.
The whole reason we play music is to have fun. We’re not an angsty band by any stretch of the imagination. ACR plays songs inspired by Classic Rock, Folk and Blues, styles of music that aren’t exactly cutting edge, but they’re classic for a reason. There’s a lot of new things to hear when you dip into that well and we’re one of them.  Another Canadian band once said “We’re here for a good time, not a long time” so have as much listening as we do making it.


The Addington County Revue: Our lead guitar player has to spend the summer on his family’s farm (seriously) so our immediate plans for the next few months are to gig in and around Toronto.  Like many other Canadians we want to enjoy the summer while we’ve got it.
Hopefully we’ll find our way back into the studio this fall. Until then you can keep an eye out for dates like The Mansion in Kingston Ontario on June 10th and The Horseshoe Tavern in Toronto on July 15th.
Head to our website www.addingtoncountyrevue.com to listen to some music, see some video and/or buy our EP. You can also pick it up on bandcamp and itunes.  To continue the boilerplate plug – please take a minute to visit and like our facebook page, which would help out a lot.
https://www.facebook.com/TheAddingtonCountyRevue/
https://theaddingtoncountyrevue.bandcamp.com/releases
https://www.instagram.com/addingtoncountyrevue/
https://vimeo.com/user14095035
https://vimeo.com/mbop
https://www.youtube.com/channel/UCsvylt-xBqIG0A6sl7Oyheg
https://soundcloud.com/addington-county-revue
Posted by Unknown at 7:48 PM