Definitely Not Für Else 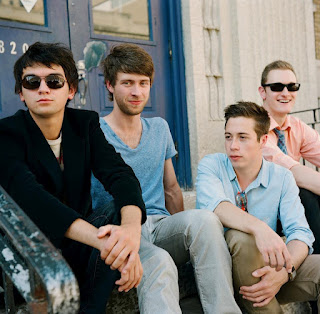 Hammer Records was invited out by our friend Gabriel Savage to check out touring band Fur Eel. Which a name like that we didn't know WHAT to expect. From seeing this band enter onto the stage, a certain vibe emanated off them that can only be described in one word, Swag.

Once the mix had been adjusted and all the instruments could be heard clearly we could really feel the talent dripping off these guys. Such a deep groove and funk buried deep into their music that only comes from having listened and learned from the greats. Their front man had the soul of Elvis flowing through him that night as his soulful voice blasted over the speakers. He dance moves were artful with a slight hint of cheese for fun. Though most of the crowd was sitting, all heads were indeed bobbing!

The bass was fat, P-H fat. Perfectly in the groove, pushing or pulling the beat as he felt needed. Grooving off to the side worked well as leaving more room for the frontman to move around the stage.

Two lead guitarists are fairly common for bands, but both that have slightly different styles, but as talented as these two were rare. The singer also played lead and laid down some fantastic solos, while the other guitarist blew us away by his playing, rhythms, leads and just stage presence. Felt like every note was a word from his soul. Both were very melodic players with lots of tips and tricks up their sleeve to keep the crowds mouth wide open the entire show.

The drums were solid and but not quite as fat as the rest maybe it was just a rough night but it felt like they weren't as expressive as the rest of the band. But solid playing, great beats which made the whole vibe so much sweeter.

The whole collective sound really captured the audience but everyone got off their feet and danced the night away near the end of the night to one of the best songs in their set. Involving the audience during the breakdown to build them back up again with singing.

Next time they are in Vancouver, go check them out. Buy a shirt, they were very kind in giving us a CD which is GLUED into our cd player in the car.

Emerging Artist Of The Month

Check out Solo D's new single recorded at Hammer Studios. To learn more about Solo and his music check out his Facebook page at www.facebook.com/Solo.D2012

Watch for his full album coming this August!

Spread this video around!
Posted by Hammer Records at 11:28 AM No comments: