Have A Smashing Time

Super proud of these guys for really rocking the album, the video and all their shows. The more I see of them the more I think they have something unique. Relatively young, but definitely not inexperienced these lads are taking the scene the storm and also spreading their music nation wide. With only a week and a half and already 6,000 views! If you haven't checked them out, be sure to do so, also a shoutout to the clean vocalist for really adding to the track. I would like to see more clean/dirty vocal songs for their sound as I think it also helps them break out into the more mainstream market. BUT CHECK OUT THEIR VIDEO BELOW!

Posted by Hammer Records at 1:04 PM No comments: 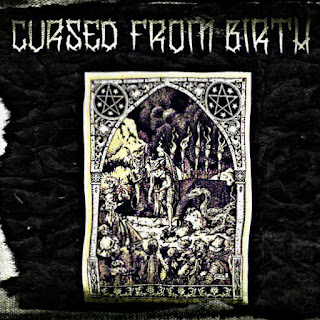 We had a great email from a band looking for get our thoughts on their EP. We receive plenty of these so its takes us a while to get around to all of them, but I am very glad to have listened to these guys.

From a mix of old God Forbid, Metallica and Megadeth these speed riffs really are super tight and crunchy. I'll be going into each track in detail but just a note on how I like that they choose for more of a crunch, upright in your face guitar sound than the usual mid scoop sound which sometimes leave a little less definition in the guitars than I would like. But lets take a look and their EP.

"Darkness Descends"
Showing their softer side, but also their guitar skills right off the bat with this very neo-classical introduction. A great sense of melody but also the ever changing chords keep it from getting super repetative. Great start and a hint at what to come.

"Living Sacrifice"
Diving headfirst into the thundering galloping riff that defines this song. The vocals are quite plain and simple which really allows the lyrics to come through. Seems like a song that would have the crowd chanting along with the singer. Some great switch ups through in the song including the halftime swing feel at points, the guitar riff break and the not overly complicated guitar solo at a great length to fill out the track. Then switching into a whole slow sludge riff for the second half which allows the drums time to really shine and show his skill. A great tune to keep things heavy but with straight up in your face sound.

"Where Sins Will Sleep"
Prepare for double kick madness, which then immediately switch into blast beats as this songs kicks the door down. Instantly I think of a graveyard as these riffs pile of top of each other. Only to hear the lyrics speak of graves in the first verse! This is the first time you hear gang vocals and I would have like to have heard them filled out and double a couple more times. It would have added to the larger than life sense of the track.

This band has a great sense of direction and an ability to easily change time signatures and tempos on a whim. Even though not only complicated riffs and solos they stand out because of the tightness as a band. A few mixing things come into mind such as a couple parts need some EQ to keep the guitar from being overly "bite-y". I would have liked to have heard a couple of FX on the vocals such as a bit more reverb to allow the clarity still ring out but add to the grandness of the track.

Be sure to check them out on Facebook at

And check them out if they roll into town!
Posted by Hammer Records at 12:42 PM No comments:

Don't want to miss this show! New songs and lots of new stuff on the Horizon!

Solo D wrote a song for Remembrance Day that we would love to share with you all. This is written for everyones whose lost a friend, family member or significant other due to war. But also for our soldiers who continue to fight for our way of life. Our hearts go out to you all.
Posted by Hammer Records at 2:27 PM No comments: 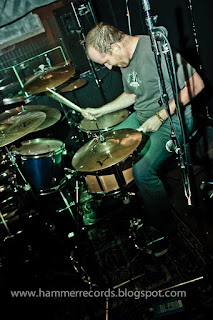 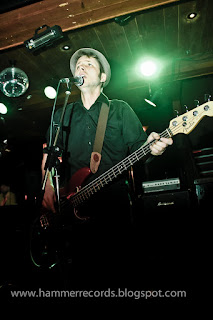 A band we've wanted to catch for a while now was rocking Joe's Apartment on a Friday night and we had to make our way to check it out! Not disappointing us they but on a good show. Very rock with a hint of top 40 rock. Great movement from the guitarist but I had wished he had a bigger amp, his sound was just a bit too thin for a true rock and roll sound he was trying to portray. Nice and deep bass lines filled out the sound along with fantastic drumming really laid the ground work for the edgy vocals to sit on top. Check them out on Facebook at https://www.facebook.com/nukemniceband
Posted by Hammer Records at 2:20 PM No comments: