The Vancouver Seeds Showcase kicked some serious ass. If you remember we caught this headliner band back almost a year ago opening up at Venue, now here they are headlining the Commodore. Coming off a long tour opening up for Slash, they came back to Vancouver to rock their tunes again for a packed Commodore Crowd. Hammer Records was there with cameras blazing! 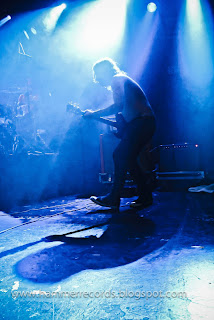 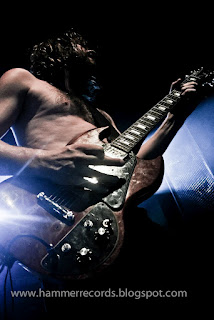 Posted by Hammer Records at 12:35 PM No comments:

Check out State Of Anomie's new music video! These guys are doing great! This video is a mix of crazy, weird and class. The band has told me that it started off serious but got silly, I beg to differ. I think this really stays dramatic through the whole video. Some shots are amazing, a couple lack conviction but the actors really stay true through the whole video. So definitely give it a good look!
Posted by Hammer Records at 12:18 PM No comments:

A Great Day In The Park 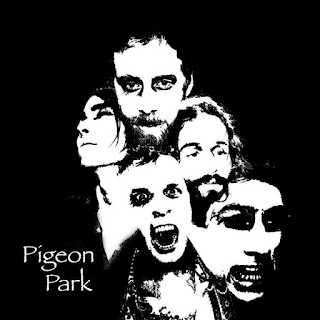 Well, they've done it. Pigeon Park has finished their new self-titled EP. If I could re-name it I would call it "Day In The Park With The Pigeons" because this album you finally get to know the tip of what these guys are all about. You know that phrase "Humans have layers like onions" Well imagine the biggest freakin onion ever and BAM! you got PP. Every time you think you have them pegged, they pull something brand new out and blow you away.

A quick touch on their CD release party at the Media Club. They played the ENTIRE album and wow did it ever sound amazing up there, sweat and tears combined created a truly sensual relationship with the crowd! Their encore, a cover of "Bennie And The Jets" just rocked the stage and is a song very close to my heart with the passing of my parents. Great talent there up on stage! Fantastic now to see it transferred to an album.

Onto the album! Starting off with "Lovelight" in true Pigeon Park fashion, an epic bluesy jam. This introduces the sound of the album right off the bat. Lots of grit, lots of room to breathe for every instrument. Very progressive feel to the track as a whole but always building into some great riffs and sections that define Pigeon Park quite well. From the screaming leads, to the groovy little breakdowns, ending with the laid back but powerhouse vocals floating gently overtop. Great opening track, racking in at 4:38 this is the second longest track on their album!

If you couldn't sink your teeth into the prog-blues-rawk then have no fear! Radio single is here! Rose and I both agree that "Figures" is the song we've been waiting for from Pigeon Park. Reminding me of a mix of Hedley, Foo-Fighters, but reminding Rose of a more Hall & Oats and Eagles flavour. While this song is mixed well, when listened to on car speakers it just didn't stand up to some of the modern stuff on todays stations. While we know that is never the goal up front, but is always a thing to keep in mind with a single like this. Changing up the mixing style just a bit to add that extra punchy fullness to the drums, low rumble to the bass really would make the track. The kick drum gets lost a little too much to have that modern flair. Pigeon Park could get some great play on 99.3 The Fox, it makes it harder for them to break into the pop-rock dominated stations like The Beat, or Virgin which is a shame because this song has great structure, great parts, and fantastic vocals (harmonies included)! This is one of our favourite tracks on the album.

As Monty Python would say "and now for something completely different" the album switches tracks again to be with a similar sound as the first track, but bringing a classic old school rock feel to the track! "Only Us Fools" is among similar lines of "Taking Care of Business". From the fantastic mini drum solo at the top of the track, to the half-time choruses this track never lets your mind wander. Switching time signatures on the verses must have taken a long time to get perfect but they switch back and forth easy enough!


"Hopeless" takes things down a notch, letting some very fantastic guitar lines come on through. Each instrument allowed their room to grow and speak its own words. The vocalist took a whole new flavour in the verses and really showed his versatility. Great flow of the song, strong chorus and then a nice section of tight riffs after the chorus that brings it back to verse or leads it perfectly into the guitar solo of the album. This solo fit like a glove and was exactly what the song needed. It stood out, said its piece and then retreated back. Clearing a place for the vocals to really scream their meaning home. So much soul and feeling set into one track, by the end of it you get the true sense of "Hopeless".

"Statues Of Feather" clocks in at the longest track on the album but once again, it just seems to fly by. This roller coaster of sound starts at the bottom, slowly rising you up towards the skies. Pleasing, calming, letting you put your guard down. Very pink floyd inspired. Then out of no where comes this  crunchy clean guitar and your launched into a head bopping feel good time which can't help but put a smile on your face. Similar melody vocally as before but a whole new twist allowing you to accept that its something new. Then a guitar lead takes you around a corner and you find your self just sitting back enjoying the ride, not worrying where it will take you. Just as you think its over a whole new beast rears it head and you find yourself at this gritty dirty blues house that takes control of your brain, and as it fades into nothing the only thing you can remember about the whole experience was that.. it was awesome.

I love bonus tracks, now I'm not sure if this was meant to be a bonus track, but what a great way to wrap up the album. This knee slapping ol'school tune makes you want to pick up a pair of spoons and start playing along. Fantastic direction to explore. Killer, just killer!

All in all a great album to pick up. Worth every penny. Doesn't put you to sleep, this keeps your ears and brain stimulated through the whole things. Lots of variety so if you find yourself not jiving on one track you might enjoy the next. A little of everything for everyone! Do yourself a favour and CHECK IT OUT!

Links are included below!