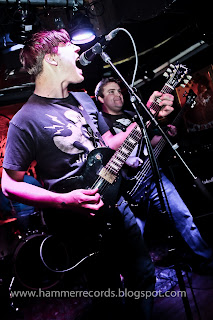 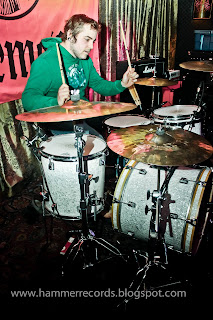 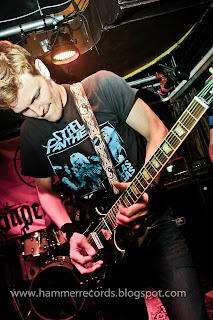 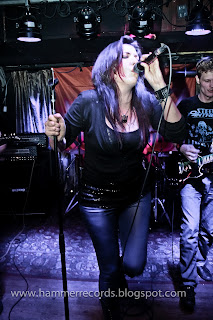 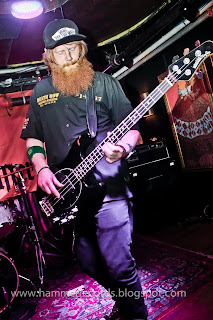 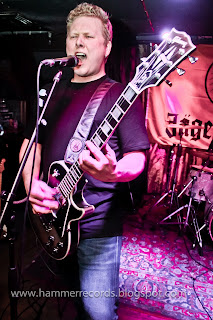 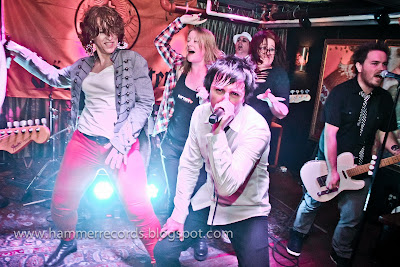 Cheers!
Roxy
Posted by Hammer Records at 11:50 PM No comments:

It was a slow, rainy night in Vancouver however the three acts for this weeks Cellar Launch Project managed to bring in a fair crowd. We were sad that the other half of "Mr. Completely" couldn't make it out that night, leaving Matt Cairns to perform solo, and 'Sick Logic' was nowhere to be found, leaving 'We, The Sheeple' to take their place in the competition.

Side note: We were not impressed with Sick Logic that night. Failing to show up for a show without any notice is never fair to the promoters who put time and money into running a venue and promoting your band. The fact that no mention of this show was ever on their FB page made us wonder if they had had any real intention to play the show.

Having only three acts this week, Matt Cairns hit the stage around 9PM, thankful for the extra time to allow some of his late fans to trickle in from the rain. Matt always puts on a good show for just a guy, his voice and his guitar. There's always a great amount of passion behind the lyrics, and emotion put into every song. You can tell there's a real connection between song and songwriter. However, I believe that the addition of a full band behind him is what will take him to the next level at this point. Matt Cairns is one hell of a songwriter, and absolutely has guitar and vocal talent, but without the addition of a fully produced/filled out sound behind him, I feel he could be more of a success as a songwriter vs. a solo act. Matt is very active in the local scene, and if given the chance, please do attend one of his shows! They're never disappointing. 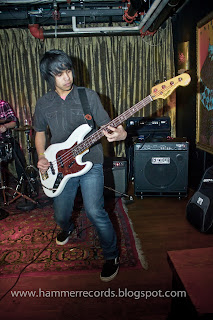 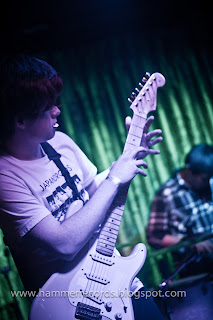 We, The Sheeple was next to hit the stage. They had obviously come prepared to play as they impressed us with such a quick set up time. Having never seen this act live before, I wasn't sure what to expect. They had a very indie-pop-rock sound, and the looks to match! For such young guys, they pulled off a really tight sound. I thought they had a lot of potential. We, The Sheeple showed great personality on stage, were very inviting, and had some wicked guitar work in their songs. I think the lead guitar could have been louder, and the vocals a little more developed (perhaps work on delivery, or if proving to be difficult to play an instrument and sing, find an additional lead vocalist?). Overall, I thought they played well, and held their own in this competition. Be sure to keep your eye out for this young band. I'd definitely see them again! 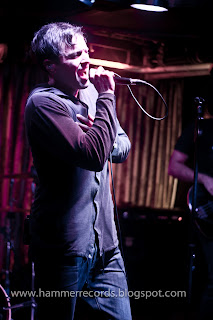 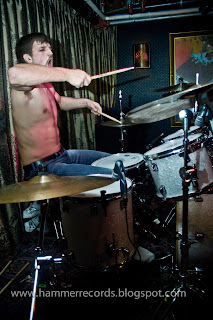 Last, but certainly not least, was Amusia! This band looked great, sounded great, and moved really well on stage. The vocalist has an amazing tone that really captures people's attention, and with such a strong instrumental sound behind him, the only thing that may be holding them back is their very 'progressive' sound. Although progressive music is great, and I personally love the genre, in terms of marketability, it'd be nice to hear a defined "single" or two on the set list as well. Something geared a little more towards a radio audience. In my opinion, the "end of the world song" and the last one of the set had the most potential as singles. Overall, I really enjoyed the set, and can't wait to see them perform again.

James and I had a fun night, and are looking forward to next week! If any bands are interested in more photos from the evening, please email us at HammerRecords@hotmail.ca for more info.

-Roxy
Posted by Hammer Records at 10:24 PM No comments:

After such great performances from the first two Cellar Launch Project nights, the bar was set pretty high. This night was loaded with three bands and one solo artist. First up was Connor Roff. 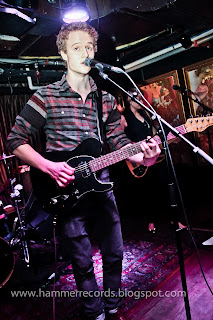 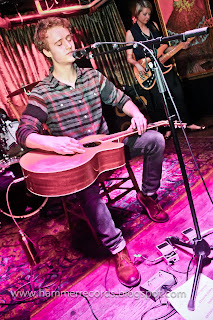 Hammer Records has seen a lot of solo artists perform. We have been to a lot of open mics and acoustic shows. We have also seen a lot of singer-songwriter acts take their songs and try to introduce a band into the sound. Connor Roff is one of the few that we have seen do it right and it really took his songs to the next level. After hearing the recordings on his Facebook page we were expecting a chill acoustic set, but open arriving at the Cellar we were greeted with a full band set up. The drummer was fantastic and really complimented the songs. The bass was simple but dynamic to allow Connor to fill most of the sound out with his guitar and vocals. Connor's charm and smile illuminated the room and eventually everyone crowded around the front to hear his well written tunes. During his set he asked a guest vocalist to join him on stage and our only criticism was that she tended to sing slightly off key, which made Connor sway slightly off pitch as well when they were singing at the same time. Other than that, it was a very pleasant set. 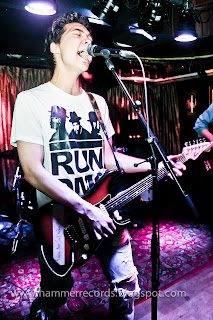 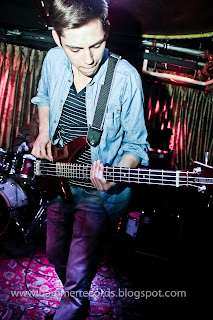 Feller was up next. Not having a Facebook page or any links to music that works really makes it hard for us to get a feel of a band before seeing them. After setting up, the sound guy turns off the club music and all eyes turn to the band. The lead singer/guitarist gets up there and starts tuning his guitar; no tuner, just using his ear. This is a show at a venue, not a jam room party. A big part of our judging marks go to being prepared. Having a tuner which band mates can share ensures that once you hit the stage you can start playing as soon as possible. That just seems like common sense to me. Upon finishing tuning, he turns to the bass player and HE starts to tune off of the guitarist's strings. It's really hard to tune accurately using one's ear unless you have perfect pitch. As later stated in their set "I don't know about the rest of my band but, I'm not here to win, I'm just here to play." Which set the tone for their performance in a nutshell. The vocals were unique and very Kurt Cobain styled. The bass had a great tone and played solidly. Their sound as a whole was pretty good, just a little rough around the edges. The best song in my opinion was the last song, which was a Nirvana cover song. Nothing wrong with that. Nirvana is a hard band to cover and they did a great job at it. 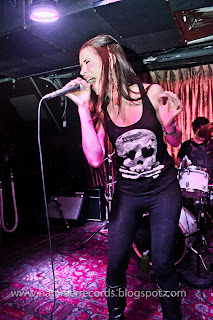 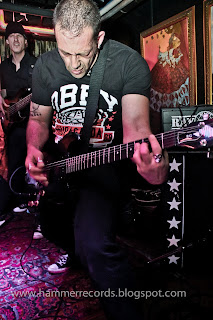 Falling For Scarlet took to the stage with a fury of rock! The rhythm guitarist rocked out so hard and played great! The band as a whole had a great marketable sound and look. Besides the rhythm guitarist, I personally think the stage presence could have been worked on a little bit more. I know singing back up and playing is hard, but when you are not singing it doesn't mean you are tied to the microphone stand. Go explore the space. I know the Cellar stage isn't the biggest, but the band can either make that stage look huge, or look tiny. The bass player was in the back and was covered by the rhythm guitarist which limited his movement, but he sang great and moved appropriately. Tight instrumentals and a great flow between songs. 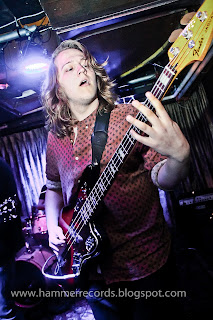 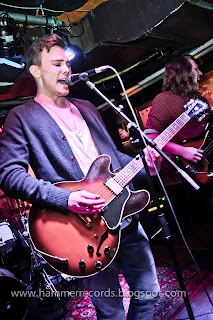 The Oceanographers were the closing band and had brought the biggest crowd of the night. First thing I noticed was that the guitarist had the largest pedal board I've ever seen.  Usually it's sign of a well produced tone, or an over zealous guitar player. Fortunately, it was the first one. All the sounds from these guys were pristine, clean and sounded rather grand. The dynamics of the band were incredible. You could tell these guys have been playing together for years and practice weekly. Feeding off each others' energy and delivering it right back at the audience! We highly recommend seeing these guys at their next show.

In the end, it was a pretty crazy night! Which for us actually ended up having our car towed because of being short by 30 mins on the parking meter. (Oops!) Looking forward to next week! If any bands want more of the photos taken that night, please contact us at hammerrecords@hotmail.ca for more information.