Lucid Afterlife - I Am

This track rocks. So dirty, gritty and heavy. The moment you put on the track, the air just seems to become thicker as you listen to this sludgy guitar riff. Mixed with the retro Superman fight something about this video is just fitting. Check out Lucid Afterlife's Facebook page HERE.
Posted by Unknown at 9:46 PM No comments:

Almost a year ago Mitigo released this awesome video! The whole scenery reminds of me of some awesome house parties back in the day! Very Vancouver rock and roll! We've heard these guys a few times on stage and quite enjoyed this video. Be sure to check out their video for The Fly as well!
Posted by Unknown at 9:44 PM No comments:

Retro is almost becoming its own genre. Building tracks and music that just make you think back to a time before. Gives you that nostalgia factor. This album could be the soundtrack for countless 70's and 80's movies. Its a great mix of cheese and music taste. I keep expecting a vocal to come out and someone to start singing but as far as i can tell it's not how this group works.  Be sure to check out their Facebook page and bandcamp for more releases!
Posted by Unknown at 9:37 PM No comments:

For all you EDM loving people, we have a treat for you. This track is melodic and just builds and builds! Professional sounds building a beautiful track! This reminds me of Tiesto with some of the sounds. Put this track on and jam out. Warning! Your head will be bobbing while you listen!
Posted by Unknown at 4:34 AM No comments:

Recording an album is risky enough, adding in whisky, just means its EXTRA dangerous. I wouldn't' expect anything else from Lou Danger and the Thrills! These boys just dropped a sick album. Grab a fresh bottle of Whiskey Business and take a shot every time you find yourself nodding along to the catchy hooks, guitar riffs or thick bass lines! The drums add that sense of urgency that keep the songs bopping along! From this little teaser I was hooked and wanted to hear more more more!
Posted by Unknown at 2:40 AM No comments:

The Living - The Jungle Is Dark But Full of Diamonds

I'm a huge fan of Muse so when I hear an album like this I can't help but get excited. Symphonic, Rock, but with an operatic rock voice, just makes me giggle like a schoolgirl. This whole album is just dynamo and full of surprises. You think you have this band pegged as something and then suddenly they give you a whole new feel. I need to see these guys live. I have a huge love for strings. This band reminds me if Apocolyptica joined up with a band. Just amazing. Cinematic music is my other jam and this covers that! I could see this in everything from an indie flick to a full on motion picture. I wish these guys the best!

When bands go that extra step to take their music to the next level, that what we at Hammer Records live for! Heres something more than just a song. Its a story. The video is amazing. The actors and film crew are epic. It just take the song to a whole new level! Mirrored with their lively performance shots, their character shots just take on a whole new life. I wish more bands put this amount of effort into their videos! The track is just so thick and full of stoner rock goodness I'd love to see these guys open up for Dozer, Kyuss or Kylessa!
Posted by Unknown at 1:56 AM No comments:

Sail With Kings - Where You Wanna Go

Catchy, thoughtful and haunting are the first words that come to mind when I hear this singe from Sail With Kings. The vocals are just amazing. If they can pull them off live just as well as they are in record then they should have no problem in having an amazing show. The guitar riff mid song just gets your feet moving. You just want to clap your hands at the sheer speed of the riff. This is a beer drinking folk song no doubts about it. The vocal lines are hook after hook, every line so catchy you just can't help but sing along!
Posted by Unknown at 1:40 AM No comments: 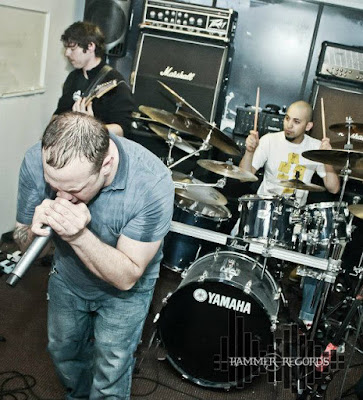 Porcelain Sky’s new EP is a beautiful piece of work. Four creative minds pushing the boundaries of their genre. This album is lives beyond borders, reaching between genres, mixing influences to deliver a solid 4 track record. Thick moving technical bass lines backed by rhythmically challenging drums building a tight backing. A dynamic guitar adds melodic harmonics, heavy rhythms and soaring leads. Straight hard rock vocals lay overtop of everything. Gritty, down to earth thundering vocals. Give your ears a treat and listen to the album in its entirety.

Check them out at www.porcelainskyband.com
Posted by Unknown at 1:33 AM No comments:

Air Combat. Fighting In The Air. Free Falling. This album is just awesome. A supergroup of members. Taking all the influences writing something raw and truthful, but taking things one step further and refining the ideas and having the final songs sound amazingly produced. It shows the professionalism and experience of the members and that the finished product is something that could be on Radio, MTV and more! You can still hear the dynamics and the rawness but with such a polished sound, this album just takes that step from local band to a force to be reckoned with! I look forward to seeing them live and hope they bring the energy that I felt on this album!
Posted by Unknown at 1:11 AM No comments:

Within Rust - Light And Shadow


This album is just beautiful. I used to seek bands like this back on the days of myspace. I looked for something that was so sonically appeasing and just straight catchy but also had a driving force behind it. "Light And Shadow" would have been one of my albums on repeat when I was in high school. I need to hear Within Rust's single live to have it fully envelop my body! The whole album is just packed full of well written, awesomely mixed, well produced tracks. This is the best representation of Within Rust's sound that I've heard so far. I would love to hear what they do if produced by someone who produced Muse or Deftones, but this album is just amazing. I've heard them play live before but I want them to play this album front to back and it will be an experience for the audience. Buy this album, either from iTunes or from them and listen to it over and over. It will never get boring.
Posted by Unknown at 12:59 AM No comments:

All The Way From Greece... Serenity Broken!

Greek band Serenity Broken is planning on releasing a brand new single off their 2nd album coming out later this year!
Posted by Unknown at 1:52 PM No comments:

Hammer Records had a quick interview with Joey about an upcoming Vancouver Metal Compilation. Find out everything you need to know and come to the CD release show on January 22nd at the Rickshaw Theatre!
Posted by Unknown at 1:40 PM No comments:

Creativity builds on creativity. Lawless's single "Our Home Is The Road" is a beautiful piece of music. A mix between so many genres but just falls into the category amazing. The production value is amazing and the instrumentation is perfect. Mixed with some soft yet haunting vocals, this sonically jumps out of computer right into your brain.

Then you add a beautiful and creatively shot music video. These places I've driven past, walked by, but the music video just highlights the beauty of British Columbia in a totally different way. This is a great piece of work all the way around and all parties should be proud!
Posted by Unknown at 10:18 PM No comments:

Within Rust always sound beautiful. Nolen's vocals just glide like clouds over all of their tracks. Mixed with the space lyric video this tune in particular is out of this world! Sit back, put it on and watch the rain fall, its just... endless.
Posted by Unknown at 1:55 PM No comments:

From The Vine - Coastline Pilot

Coastline Pilot has such a west coast sound that they just sound like the ocean. Smooth, crisp and full of depth. Be sure to check out this amazing video filmed in the ToneFreak live room. A great sounding tune for any kind of day!
Posted by Unknown at 8:04 PM No comments:

Don't Tell Me How To Live!

Monster Truck is planning their 2016 tour and started the year off with a bang with the release of a brand new music video! This is a very Canadian video. Really cool setting and some beautiful shots! Even down to the snow fall by the end of the video, just so Canadian. Cant wait to see them here in Vancouver in February!
Posted by Unknown at 7:48 PM No comments: 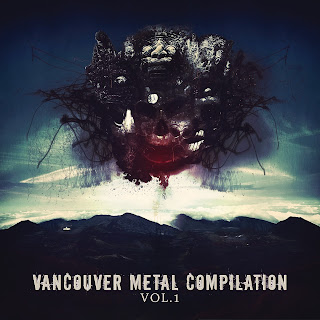 Vancouver has such a tightly knit, incredibly talented metal scene. Bands supporting bands, fans of all kinds of metal going to different shows to support the scene. Its about time that the outside world starts to know.


Inspired by the gap in attendance between local shows and touring shows, Vancouver musicians Darin Wall, Joey Hockin and Samantha Landa decided to assemble a sampling of Vancouver metal bands to distribute online and outside bigger concerts for free to show attendees the diversity of homegrown talent.
“We’d go to a show with touring bands, and see just a few people there who regularly support Vancouver bands,” says Wall. “While the out-of-town bands are usually well promoted and have label support, we wondered how many of their fans don’t also know about the awesome bands we have right here.”
This album is jam packed full of music. 18 bands, 18 tracks. Best of all, the album will be available for free. The bands on the album get a ton of promotion, the album it self will be handed out in various forms as well as being able to be downloaded for free. This is not a money grab for the bands, nor a scheme by a label. This is true support for the scene to allow it to grow together. This album should become a classic. This is a great taste of what Vancouver is made of. Just a sliver, a nibble to get you hungry for more!
Don't miss the release featuring 5 bands from the album performing at The Rickshaw. Check out the details HERE.
Posted by Unknown at 2:25 PM No comments: 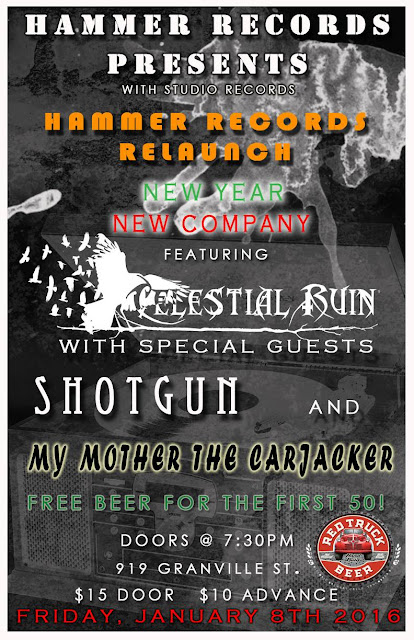 When: January 8th
Where: Studio Records on Granville
Price: $15 at the door, $10 in Advance
Perks: One FREE RedTruck Beer for the first 50 in the venue.
We will also have a FREE photobooth with props, a 50/50 draw and a draw for a free photoshoot (style of your choosing). There will also be THREE amazing bands putting on killer performances!

Posted by Unknown at 3:31 PM No comments: