Live Nation gave us here at Hammer Records the opportunity to cover the Children of Bodom ft. Death Angel and Tyr show on Tuesday night at The Commodore Ballroom. It'd been a while since we've attended a metal show of that magnitude, and were excited to finally break in our new camera lens at such an incredible venue. Needless to say, the night went well. James manned the camera this time, and I sat back and took in each set in their entirety, capturing an epic story written with musical instruments. 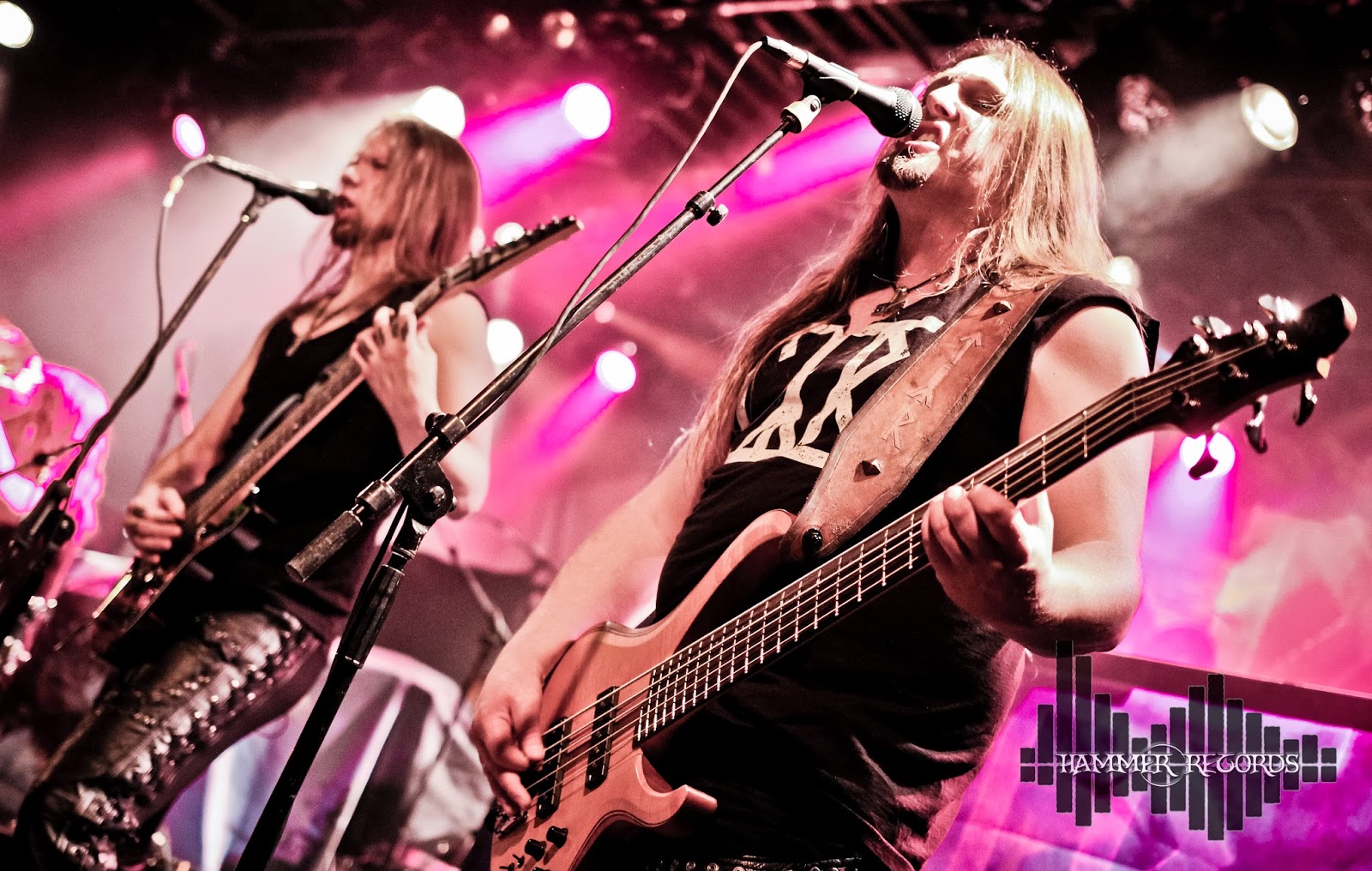 First up was Tyr. A driving Heavy Metal/ Power Metal band from the Faroe Islands. Their set was filled with melodic, ample tunes. I often find that in a long set of music, songs tend to bleed into one another, and become stale as they progress. Tyr, however, did not hesitate to produce well structured, catchy, heavy hitting songs that each had a unique sound to them. The use of multi-vocalists helped the vocals clearly cut through the driving, hefty instrumentals laid out by both guitars, bass, and drums. Though they mostly remained locked to their mic stands, their stage presence still stood out, accompanied by some light headbanging and flashy tap solos. There was certainly a large group of dedicated Tyr fans in the audience from the beginning of the set onwards, though by the end of their set, everyone on the floor was into what they were laying down. Over all, a great performance. One I'd look forward to seeing again in the future. Check out TYR on their Facebook HERE! 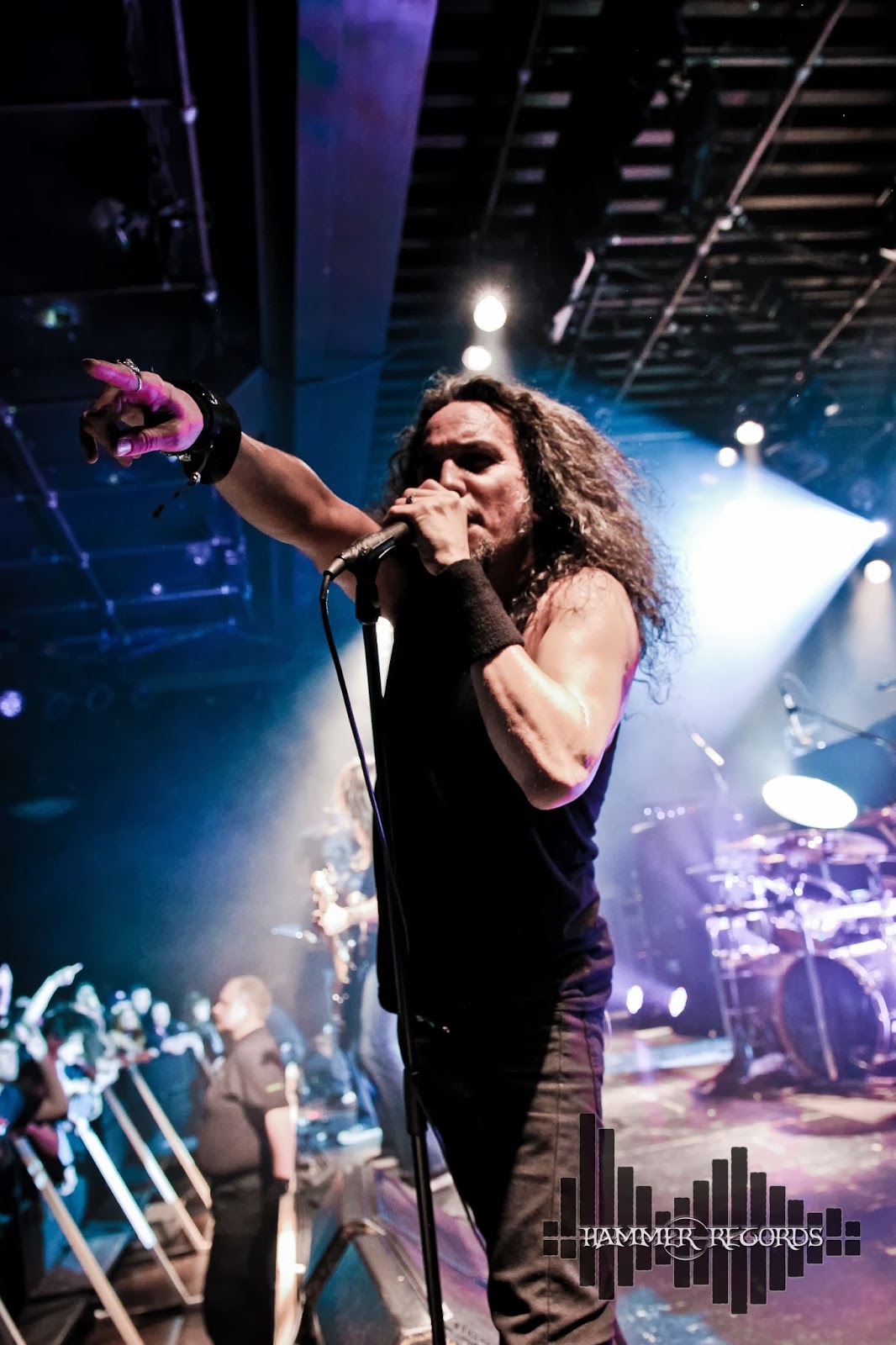 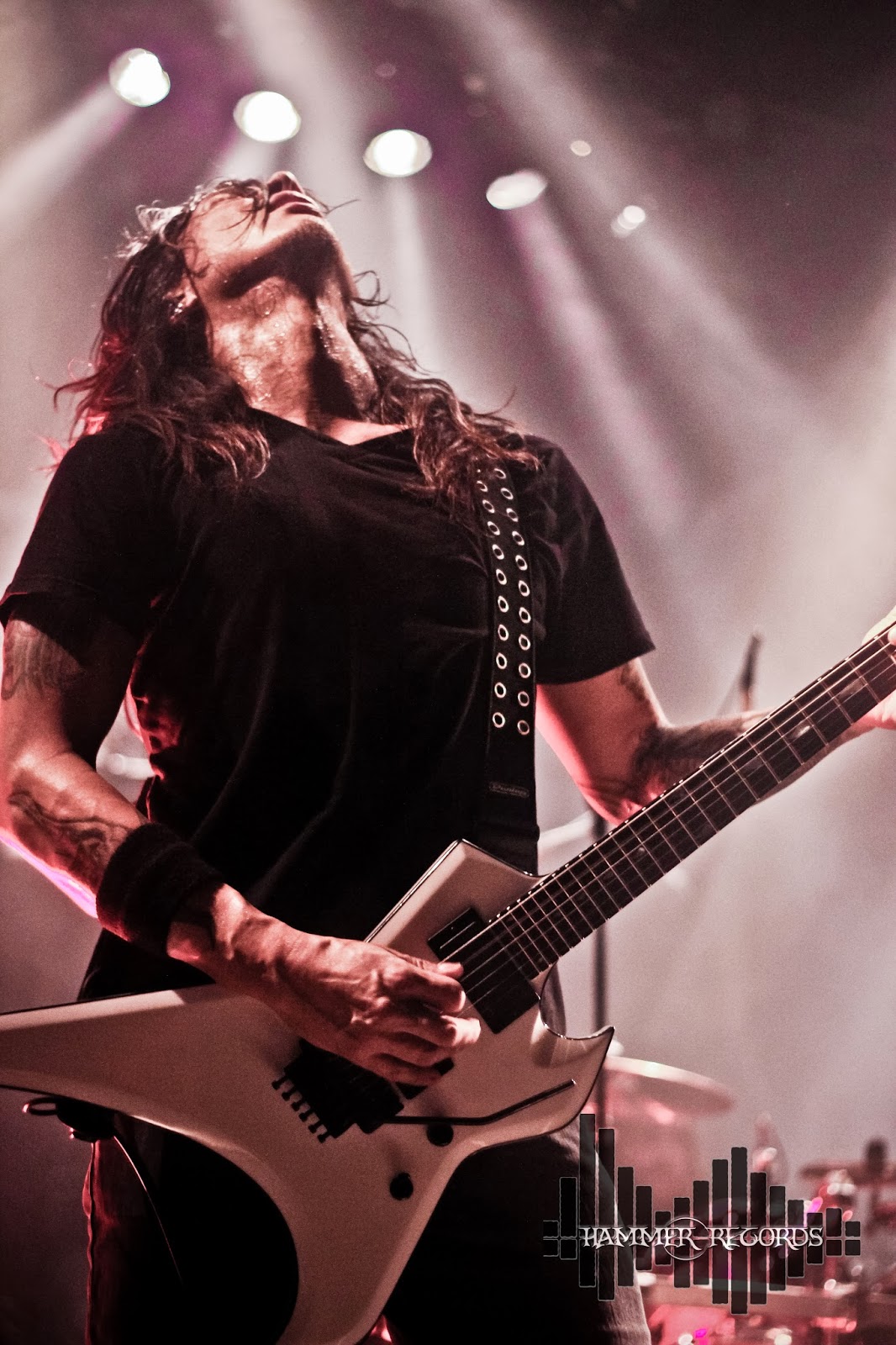 Next to hit the stage was my favourite band of the night, Death Angel. This Thrash Metal band from Bay Area, California won my appreciation with their epic stage presence, driving charisma, thick hollow drum and bass sounds which were super tight rhythmically, and fearless riffs and licks. Having not heard much of their music before the show, I wasn't exactly sure if their sound was something I'd be particularly into. Turns out, as I mentioned previously, they were my favourite band of the night. The members of this band appeared to be great friends, and looked like they were having a blast on stage together throughout the whole set. The lead singer also extended a cheers to the audience with his bottle of Bombay, welcomed new listeners of their music, and told the audience about when they as a band fell in love with Vancouver - 1987. All in all, this is a band I'd love to see live again, and will definitely be picking up their album in the future. Check out Death Angel on Facebook HERE! 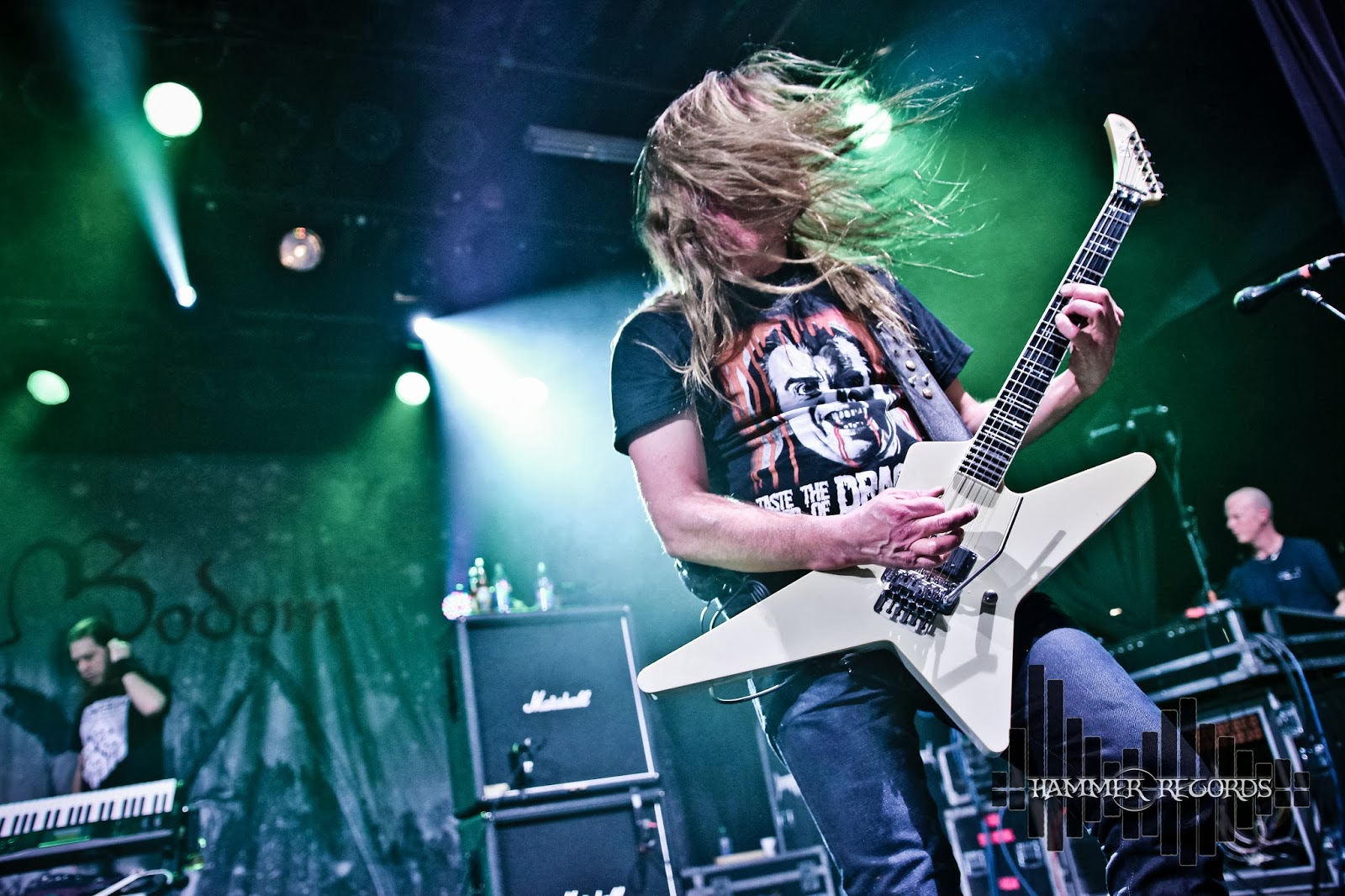 Last, and the heaviest band of the night was who everyone was there to see - Children of Bodom. Now, this is a band that's been around the block for a long time, and it shows. Their showmanship was spot on from the very first song. Their entire sound was so thick and heavy. They were melodic, intense, and dramatic. The vocals soared above in most songs, the riffs were fleshy and full of substance, the bass and drums were super tight and the keys really helped fill out the whole sound and added a dynamic of their own. Before the set, between each song, and at the end of the night, Children of Bodom had fans chanting their name - and I bet it felt great! The energy in the venue was infectious. Band members and fans alike seemed to be having the best time of their lives. If you're reading this, I'm assuming you already have Children of Bodom "liked" on Facebook, but on the off chance you don't, check them out HERE!

Posted by Hammer Records at 12:35 AM No comments:

#VancouverMusicians is an online documentary series about the Vancouver music scene. We interview artists of all genres to get their insight and opinions about the scene, venues, past and present. Tune in every week for a new episode with a new local musician.
Posted by Hammer Records at 4:47 PM No comments:

Live videos are plentiful from bands now a days. Seeing a live video that isn't done from a fan with horrible camera audio is a different story. Rain City Recorders are a huge hub of metal in Vancouver. They work with all kinds of bands and always produce amazing results. You have to check out this set of live videos filmed and recorded there with the band Baptists. Such an organic feel to this video, it's like being right in the middle of these heavy metal gods riffin it out.

Check out the video down below and their Facebook is HERE.

Posted by Hammer Records at 2:53 PM No comments:

From The Land Of Oil

We love hearing new bands and sounds. Someone posted this song on our wall and it's one of my favourite types of metal... dynamic, melodic and heavy. The Equinox is from Edmonton and if I ever get out there I'll try and check these guys out!

Posted by Hammer Records at 2:45 PM No comments:

Rising Above The Clouds 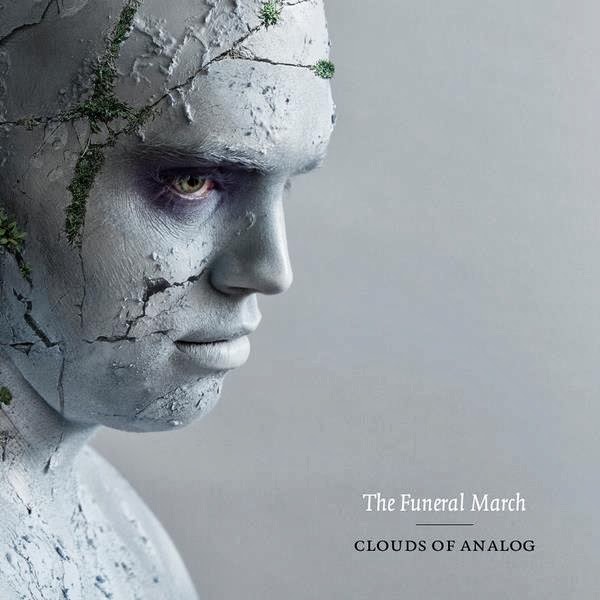 We are always seeking bands that take things to the next level. In this day and age its possible for a local musician to get professional quality recordings. It takes more than just a great engineer to craft a great sounding album. The musicianship must shine through on each song. After hearing Clouds Of Analog's album, I truly think it takes things to the next level.

The opening track, "Be4Me," is a heart wrenching tune. Starting nice and simple and ending in a fiery heat of passion. It reminds me of a cross between Imagine Dragons and some classic rock bands. The lead vocals drive the song. So much character in the voice that your ear is instantly transfixed.

As the album progresses, it provides a great mix of both ballads and upbeat tracks. The drums sound great and keep the momentum in every song. When combined with the riding bass and guitars the whole album seems to just fly by, leaving no dull moments. The keyboard and synth work do a great job at filling out the tracks as well. Each song is crafted to have interesting instrumentals accompanied by the raspy vocals which keep the underlying tones of each song unique.

We would love to see these guys live at a venue to see if they bring a sense of drama to the stage. Honestly, I would be very disappointed if we watched them play and the singer was behind a piano for the entire set, or the band never moved. I almost want a "Muse-esq" performance from them. I will be greatly satisfied if I see them perform a killer set.

Recently signed with Rednyne Productions, I bet I can expect some killer shows on the horizon! I'll be keeping my eye out for these guys and can't wait to catch a show.
Posted by Hammer Records at 11:22 AM No comments:

When Black Sugar released their EP I was impressed by the sonic quality of their album. After seeing them at the Roxy, I was quite impressed with their live show. Black Sugar just released their first official music video for their single "Pretty Woman" and they look great on camera! Having a good modern rock look with a very solidly produced video really takes the single and allows and viewer to submerge him/herself into the lyrics. Have a look down below and check it out for yourself!

Posted by Hammer Records at 9:39 AM No comments: 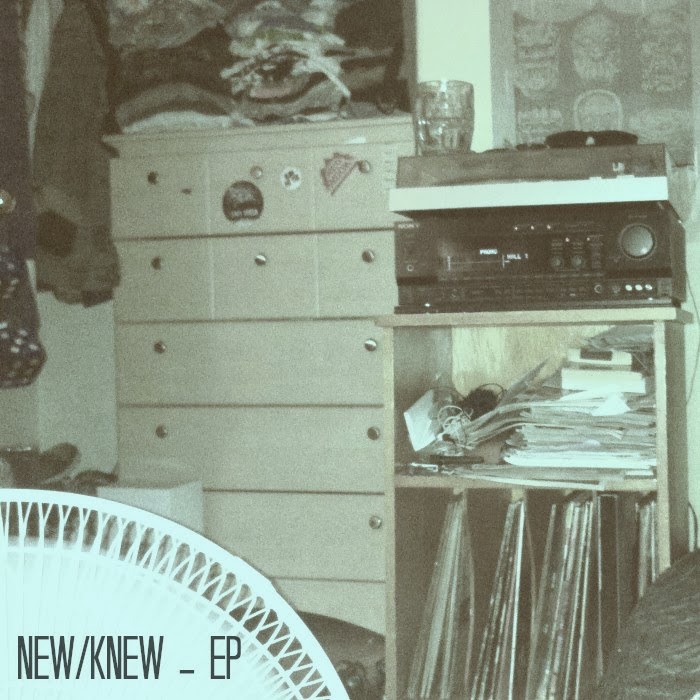 Band's histories are always interesting. Hearing about what the band has gained and what it has lost sometimes are just as interesting as the bands music, and sometimes it even helps explain the thoughts and creative process behind the band.

The Cut Losses is definitely one of those bands. Two people in musical sync who gained quite a following and were gaining media attention, then to all of a sudden split. It takes a lot of patience and guts to pick up the pieces and try again. Most would start under a new name but "The Cut Losses" stuck with Patrick and he decided to continue the band under that name. Gaining new members he forged new music and released their EP entitled "New/Knew"

Their EP is a great collection of indie alternative tunes which are upbeat and have some memorable hooks. I found myself singing "Long Distance Caller" in the shower after hearing it. Nice and simple drums overlaid with some thick riding bass lines keep the songs rocking forward. The guitar have some great melodies lines which compliment the lead vocals. The backing vocals add a perfect finish by emphasizing certain hooks.