First Night Back Out!

We were invited to come see Aviator Shades at the Cellar and jumped on the chance. It was our first time out on the scene after the birth of Eliseo. Soon enough we will bring the little fellow to soak up the local music! 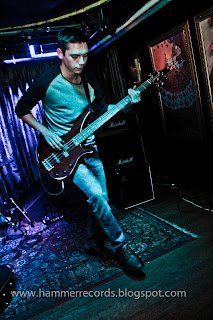 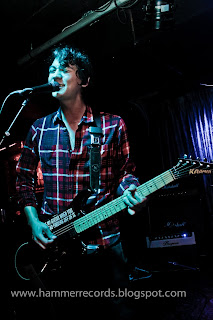 Feller was just starting their set as we walked down. We had seen them play back in the Cellar Launch Project and was very interested to hear how they had progressed and grown. I don't know if it was just the different sound guy, or maybe a different vibe, but they sounded 300% better. We found their new tunes to be very pleasing to the ear and had a great balance of melody and vocal grit. The guitar was nice and crunchy which complimented the deepness of the bass perfectly. The drums were crisp but not overpowering, which is great to see with a three piece. The vocals sat perfectly on top. Clear enough to hear both the lyrics and melody lines sing through. Overall a very good set! 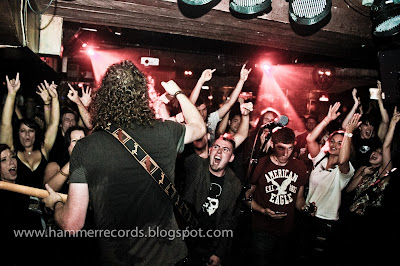 Aviator Shades took to the stage like old pros! From the moment you heard Dave's voice through the speakers, you knew you were in for a ROCK show. Fresh off of recording their debut EP with Danny Craig (DEFAULT), you could tell their tunes had been polished. A new sense of freshness and professionalism seem to have filled their songs. Great stage presence as always; putting on a rock and roll show like no other! More and more they keep reminding me of Guns N' Roses (at least what I've read of their early days). I believe that with just a few years of hard work some big things could be in store for this band!
Posted by Hammer Records at 1:19 PM 1 comment:


A new video from the band Handsome Distraction. This Vancouver Island band always puts on a killer live show, and this new catchy song really sounds great! Definitely check it out!
Posted by Hammer Records at 1:44 PM No comments:

Introducing a new member to the Hammer Records family: Eliseo Ryker Scott Weekes. This bundle of joy has been 9 months coming. He is amazing, and we are so happy and excited for the future! 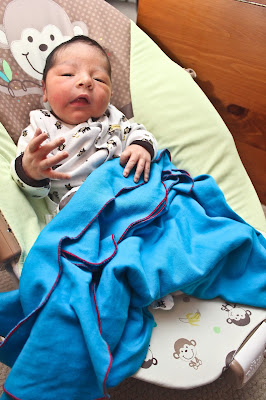 Do not worry! This will not be the end of Hammer Records. Yes, we will have to slow down a bit to make sure we take care of our new son. But fear not! We will be hitting the scene very shortly and spreading the word of Vancouver music as best we can!
Posted by Hammer Records at 1:18 PM No comments:


Check out Falling For Scarlet's debut music video for their single, "Army Of One." Some big names in the credits for both the filming and music production of this song! It looks fantastic and sounds great! I really hope they push hard and get this video out to all the right people. We always love seeing Vancouver bands try to take things to the next level, and putting in the time and effort to make things amazing!
Posted by Hammer Records at 1:07 PM No comments: