Venue club was easy to find thanks to the ginormous sign on the Granville strip. The interior décor was something like a mini theatre with impressive lighting displays and a really well done mimic of a rock star’s stage. Though I was disappointed to find barely any seating available to enjoy the show… and by barely I do mean about four booths that no one wanted to share with strangers. There was ample seating on either side of the stage though, for what I'm assuming was VIP as it was roped off. Maybe had I mentioned I was press I would have gotten my own little seating area but I'm just not that type of gal. The light show on stage added to the magic of the performances and all in all it wasn't a bad...venue (excuse the pun) but it definitely was lack lustre to some of the other beauties I've seen shows at along the strip. 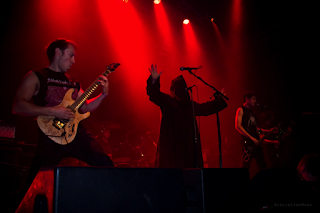 Off to a very dramatic start, the band entered on stage standing with their backs to a medium sized crowd that cheered the arrival of their lead singer, who was dressed in a grim reaper-esk black cloak. His screams and bellows were definitely very metal but I found the band over all didn't strike my fancy. The lead singer used the beginning of nearly every song to crouch down on the floor and hide himself inside his reaper cloak. Whether he wanted an epic entrance for every song or he was just shy when he wasn't needed to sing...who knows. The movements of each member at the start were either non-existent, very subdued for the type of energetic music they were putting out or they just seemed contrived. No doubt about it though the band can rock, or should I say, they can metal? Ok I'll stop with the cheesy banter but seriously, they can play their instruments and scream enough force into the mic to knock it unconscious. Oh and did I mention the drummer has one of the harder hits I've seen in a while? It surely was a very powerful show especially for this genre of music. The melodies they intertwined with the harsh bellows and drums, made the pieces of music interesting to listen to and evoke emotion. The high light of the performance for me, was when their bassist declared "are you ready for some f$&king Metallicaaaa!?" and a bit of moshing commenced. I fully believe the effort was there to have that "greatest live band of all time" stage presence and it did get better with each song but I still suggest perhaps a step up on the energy with the performance boys, your playing deserves a show that matches the enthusiasm and spirit from START to FINISH. Though I couldn't really understand any of the lyrics as does happen with live shows sometimes (I wasn't sure if it was maybe the acoustics of the venue itself or just the singers pronunciation) I did really enjoy the instrumentals of this band and I could tell the singer maybe in a recorded scenario would be more audible and most likely very good. Over all I give the bands performance 3 out of 5 hammers. Keep up the work ethic boys and I believe you'll get those elusive two hammers. Check them out at: https://www.facebook.com/medevilband 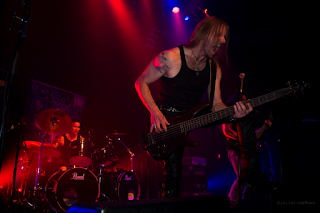 Let me just say off the top, THIS BAND ROCKED. At first glance these guys look like Icelandic Vikings who can shred the guitar. The show started with technical difficulties with no audio coming out of the lead singer’s mic but when it did, his melodic vocals came out of the amps with force. The scream of the singer reminded me something of a very likeable 80’s hair band. Let's say Guns and Roses or something. Axel would be proud of the vocals and the guitar shreddage on this man’s part. I will say that as a woman...I was jealous of these men. Not because of their musical talents. No. Because of their gorgeous flowing locks. Damn I want hair that shiny and long! These guys had great melodies. I can only assume some of their influences might be GNR, maybe Metallica, and definitely some Iron Maiden. Stage presence wasn't a problem for these guys and I will say the drummer had intense eyes. He knew what was up and was making eye contact with his fans head-banging out in the crowd. These guys look like they had a few years of experience. They were definitely older than the previous band and their show screamed that, in the sense that it seemed effortless for them. I almost feel like they were too good to play for such a small crowd. The energy and shreddage, was INSANE and I know they definitely riled the crowd up. Damn near 4.5 out of 5 hammers for these men of metal. Thor applauds you. Check them out at: https://www.facebook.com/OmegaCromMusic 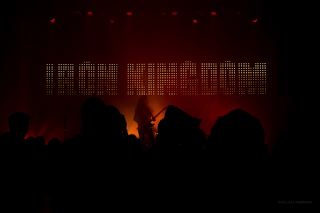 Iron kingdom had a warm welcome when they appeared on stage fresh from across the pond, kicking off their North American tour. Not only by the crowd that tripled in size from the beginning of the night but also by the sign in Venue that lit up with their band name behind the stage (a privilege none of the other bands received). The music was a different caliber of energy than that of the previous bands. I noticed that it was their North American kick off and could tell they weren't from around here off the bat. The rhythm section plunging along in a fast pace fashion was pretty good, although I wasn't as captivated by the performance. The lead singer had issues with pitch at times in the beginning. Something I've seen gets better throughout the show with quite a few bands and to this I say, WARM UPS guys and gals. It is essential. Maybe it was nerves but he definitely performed better in the latter of the show. The songs though rather fast paced seemed slow going if that makes any sense. There wasn't much stage presence in the beginning although I may attribute that to just being young and somewhat inexperienced. The band seemed eager to please but didn't have that natural ease quite just yet that comes with a more seasoned band. Maybe it's because I'm no longer 19 and I'm being age-ist, or maybe it's just because it's true. The crowd though larger, seemed more docile with their head banging and moshing which actually seemed non-existent at least in the beginning of their performance. Maybe the audience was just not used to staying up past ten o clock. Once the music started flowing so did the hair and the band seemed a lot more relaxed on stage. The heads began to bang and the smiles became apparent. Sometimes it just takes a while to make friends when you're new. They seemed like very passionate and friendly metal lovers and I especially appreciated the bass player’s monopoly man looking moustache. Maybe it wasn’t exactly that shape but that's what he reminded me of in my mind. It almost sounded a little less like metal vocals and a little more opera. Like if Freddie Mercury was just a little more badass...or had a baby with RUSH. All in all I give the foreigners of metal land 4 out of 4 coveted hammers. 100% these men can play their instruments. Rage on iron kingdom, rage on. Check them out at: https://www.facebook.com/ironkingdom
As for Unleash the Archers band, I’m not sure if they just started really early before I had arrived, or if they played AFTER the headliners (which is strange but what I thought Iron Kingdom said), but this reviewer had to be up early Friday morning. Alas, Thursday shows are just harder to rock later the more you grow up. Check them out at: https://www.facebook.com/ronkingdom
Posted by Hammer Records at 1:44 PM No comments: