Have You Been Dodging Daylight? 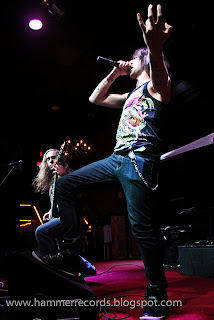 From the moment you put the album into your speaker you get the sense of doom. Darkness surrounds your vision as you enter the world of Dodging Daylight.

The intro track "The Condemned"  brings your right into the mental asylum that is "For Your Health". Dark brooding tones with some slow sludgy riff in the background set the groundwork as disturbed vocals fill your ears. Drums pound in the background sparingly. Hinting at the madness to come.

"Hate For The Weak" is the first vocals to fill your ears as the opening riffs rips into your skull. Super tight drums matching the guitar perfectly, then switching to half the speed for the verse riff. Gut wrenching screams and vocals fall over the track. Catchy guitar lead on the chorus allows great definition between structures points of the song. Pretty straightforward structure for the first track. A good introduction into the band and their sound. When suddenly halfway through the track it takes a turn in a different direction. Taking on new flavour this tasty riff switches the downbeat and adds a swing for a few bars before it launches back into the opening riff. Then a simple verse, pre-chorus chorus takes it till the end. Once again, a great introduction to the band and their sound for this album.

"Confined" carries on where the last track left off. More super tight chugging riffs with equally tight drums. The bass just fills out the sound, nothing really distinct from it but the low pounding riffs that fill out the edgy guitar sounds. Some impressive drum rolls but other than that it more or less follows the guitar's riffs. As being the shortest track on their album nothing in this song stood out for me. Great song to head bang too with its low droning riffs. Near the end of the track there seems to be a lead going on in background but its buried beneath everything you can barely hear it. Would have liked to have it stand out a bit more.

"Do Or Die" is one of my favourite tracks on their album. Definitely the single of the album if I had a say in it. From the super catchy opening riff to the great structure of the song. Using all the techniques the band showed in the previous songs they formed them into the perfect beast. Different type of vocals, a more produced melodic tone than the last but really made the track what it is. The driving snare really keeps up the tempo and drives the song along. Easily could hear this on the radio. Great track!

Getting back to the face melting "Seeking Clarity" reminds me of an early Trivium track. pounding palm muting, ever growing expanding riffs with nice use of expanded chords in areas giving more depth to just the standard metal riffs. This track does not stop for anyone and just keeps you head banging till the end.

The Final track "No Home" has the most melodic riffs so far in this album. Perfectly complimenting the growling screams and break neck speed picking riffs dotted through out the song. My 2nd favourite track on the album because I could easily see this being played in GM place opening up for Lamb Of God, Megadeth, Trivium and really getting the crowd moshing. Perfect bridge riffs which bring in a slightly different feel and different higher screaming. The ending riff is exactly what this album needed to close on, just a continued heavy dissonant riff which fades away as if your losing consciousness, and to add to that effect a pounding heart beat enters your ear. Just leaving you wanting to play the whole album again.

The album as a hole has a great feel to it, great mixing, super tight instrumentals, screaming vocals all blended together to become a sick metal album. Well produced sound that hints at the greatness to come, these guys put on a great show, lots of energy and spunk. Go head bang to them live to really get a sense at what they are all about. Below is an interview conducted by Hammer Records with them.