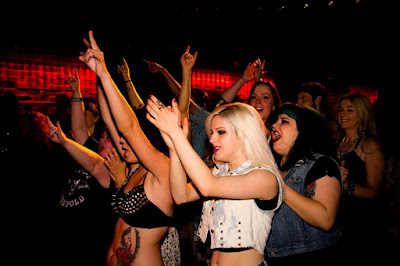 Who doesn’t like something shiny and new? If you thought Joe’s Apartment, a local music hub in downtown Vancouver was spiffy before, Hammer Records had a chance to check out its make-over at the brand new venue, “The Studio” this past Saturday night. Located on Granville Street at the corner of Smithe, this venue was hard to locate at first glance. Upon further inspection I discovered the place was below what would have been a bright neon sign, screaming the venue’s name “The Studio”, but unfortunately for opening night, was not lit up. Had it been lit up it would have been easily recognizable on the bustling streets, showcasing Vancouver’s night life.
Upon entry to the venue the velvet ropes and bouncer like detail made it feel like a very legit and fancy arrival. When entering the building I immediately noticed the assortment of records displayed on the wall for sale, which I thought was a great idea for décor and possibly for impulse buy shopping, but then again when you go clubbing there really isn’t much room for a vinyl in your clutch purse or back pocket. The door woman inked me with a trendy “I <3 Studio” wrist stamp and away I went.
The gigantic chandelier hanging in the center of the room has been and always will be a staple at this venue. The chandelier center piece paired with the exposed brick and back-lit opaque glass behind the bar gave off a glamourous and sophisticated, rock star style which made it feel like you were seeing a band in someone’s expensive home studio. Though the décor seemed very eloquent it didn’t shy away any type of crowd. People that attended the show ranged from your typical pop punk princess, to a 40 year old rocker and even a Kevin Smith looking dude.
Before the bands took stage I made my way over to one of the two bars available. The smaller bar near the entrance was equipped with your basic well drinks while the longer more elaborate bar just a few steps inward, had everything from draft beer to your fancy cocktails. When I asked one of the bartenders what type of mixed drink she would recommend she chose a Blue Hawaiian for me, which was delicious and moderately priced. Though she seemed new to the bartending experience she was friendly and helpful when choosing a beverage.
The venue itself ran like a runway model, long and slender, which didn’t leave much room for seating but somehow they managed to fit in quite a few spots for guests to take a load off. I noticed overhead there was an ample amount of space upstairs that was unused, perhaps in the future Studio’s management will put in extra seating for guests that don’t feel like being right in the throes of front stage floor action. The stage was very accommodating for the bands and provided enough room to give them flexibility with their stage presence. Behind the performers dawned a backsplash riddled with old amplifiers and stereo speakers which gave a unique touch to the vibe of the place. The bathrooms though hard to find at first, were found located around the corner of the entry and down a flight of stairs (a problem for most with a few drinks in them), but once downstairs I found it to be a quiet solace with trendy graffiti painted doors, and a clean and functional room.
The overhead audio between performances was clear and reverberated nicely in the space adding to the overall atmosphere. Compared to some of the smaller divey-type of venues local acts play in, the audio engineering was much louder and audible. It was definitely a higher caliber of performance because of the money spent on audio gear. One guy actually had his ears covered, whether it was because rock music wasn’t his cup of tea or it was just simply too loud for him is up for discussion, but based on the bands’ stellar performances I will bet on the latter.
The Studio overall had a sleek décor and a fun atmosphere for all types of music lovers. If I was a musician I would definitely want to play a show on their stage and as a guest I will definitely return. Joe’s Apartment may have been a crowd pleaser but I think it’s safe to say that The Studio was widely received and will be around to stay. For more reviews on venues, artists, bands and events keep checking us out at Hammer Records. 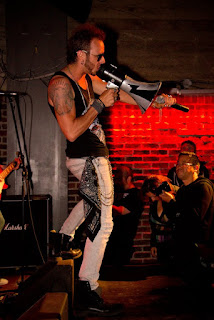 Article and photographs by Julia Monk