We headed down to Joe's to hear Kristen Karma's new single, and were surprised by the bands before her! Such a great lineup, but due to it being Good Friday the crowd was a little thin. Yet it didn't stop the Faceplants from tearing up the stage! 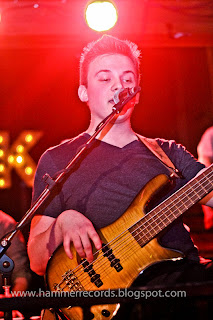 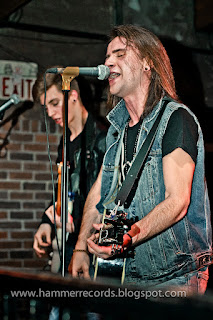 This was just a feel good, sound good band. Such a great vibe about these guys. First off, what a voice! Fun melodic vocals that was never too serious. Always moving around but always hitting his notes. Great guitar playing by both players. Solid riffs, great chord voicing, and fun uptempo songs! A very commercial sound reminded us of Hedley and Zebrahead. This band impressed us with not only their music but their stage presence and antics. At once point while covering "Bad Touch" they were dancing in unison on stage true bloodhound gang style! After their set they came and said hi and were super personable. Go and check them out on FACEBOOK. 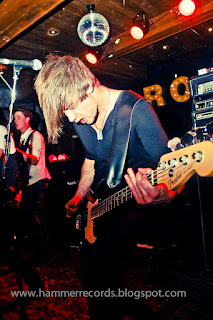 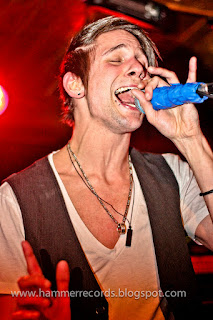 ByStarlight was up next! It was our first time hearing about these guys and seeing them on stage. They are a very commercial band from everything about their look to their sound. The auto-tune effect was great for a couple of songs but got old, especially when none of their recordings use the auto-tune effect. Their recordings sounded more like a solo singer instead of a band. So we were pleasantly surprised to see a full band. Nice full sound to this band, huge sounding bass which eq'ed perfectly with the kick to provide excellent bottom end rumble which during one song made the air literally shake. Pretty good stage presence, good movement and a great frontman. Was a little disappointed when the bassist's synth didn't work and instead of just rocking out, clapping, or picking up his bass he just sat the song out with his beer. Go dance in the crowd! There was a time when my guitar strings broke and I ran into the crowd and headbanged to my own songs because my 2nd guitar had been stolen earlier that night. But definitely check these guys out on FACEBOOK. 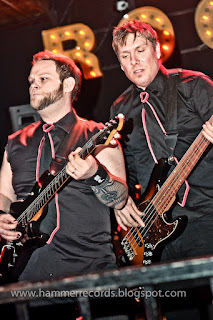 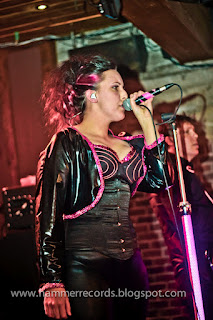 Kristen Karma was up next with a new edgy look! Hanging up her tutu she was rocking leather leggings, heels and her usual corset. Her new song at the beginning of night was slightly edgier than her past songs and gave her a more dark look. Sad that her backing tracks were really bass heavy and had to be tweaked as the song went along to prevent feedback. Her new band rocked hard! The usual drummer rocking the kit, Hachiman guitarist Nick Morrison shredding up a storm, and the brand new bassist who laid the foundation,  a great lineup! Playing a mix of new and old songs along with her cover of "Forget You" the set went off well to her group of dedicated fans. If you havent checked out her page from the other shows we've covered then click HERE.

A great start of the night! We were off to Surrey after the show for another band!