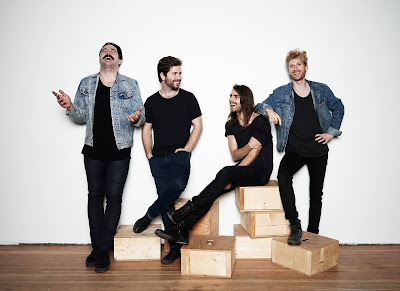 After witnessing Van Damsel at Imperial we weren't surprised to hear their named announced in the top 3 of the Peak Performance Project. Their stage presence, song writing, and overall musicianship is brilliant. We had a few words with them about the competition and their thoughts on being in the Top 3.


James: How has the competition been so far?
Van Damsel: Khatsalano was one of our favourite shows of the summer. Bootcamp was unforgettable. The challenges and final report have been a lot of work, but we’ve been steadily working on them for months now. Our showcase was a lot of fun (the sound at Fortune was fantastic as always).
But ya know, after being immersed in it for the last 5 months, it feels more like a community than a competition. We’ve made some great friendships over the course of the project that we wouldn’t otherwise had the chance to. Obviously we’re being pit against 12 other bands so there is a sense of competition, but it feels more like you’re competing against yourself since you gotta up your own game to succeed – like real life.
James: How does it feel to be announced as one of the top 3?
Van Damsel: They announced us last, again (like they did for the Top 12 announcement) and just like the first time our hearts were pounding, palms sweaty…those unique but all too familiar feelings. You can believe in yourself and all the work you’ve put in, but goddamn they took our emotions through the wringer waiting it out like that.
Relief, excitement, happiness.
James: What do you think of the idea of battle of the bands and their influence on the music scene?
Van Damsel: We’ve been in a few competitions over the years – we even won our local battle of the bands in Kamloops a few years back. It’s exciting and the exposure and prizes can help bands out immensely. It’s almost a rite of passage and can give bands the confidence to keep pushing further.
James: How does the peak performance project differ than other battle of the bands? Van Damsel: It’s a professional development program. Like a battle of the bands, it puts you on the radio and on big stages and there are judges at your showcase performance, but it also teaches you SO MUCH about the music industry. They help to develop your live show, your songs, your social media, your brand, and your business.

Catch their final performance at the Commodore Ballroom on November 19th!
Posted by Hammer Records at 11:19 AM