Every year 99.3 The Fox puts on a free show on Granville Street in downtown Vancouver for the Seeds winners, and they're known to always bring in a big band to headline the show. This year I finally had my camera and was able to document the amazing show. So, Roxy and I embarked downtown to witness the mightiness of the Top 3 Seeds bands Head Of The Herd, Gentlemen Prefer Blondes, and Louder Than Love. But to top it all off, State Of Shock (previous Seeds Winners) came to rock the stage. Sadly due to traffic, and short notice of the show, we missed Head Of The Herd; but heard they played a great set. 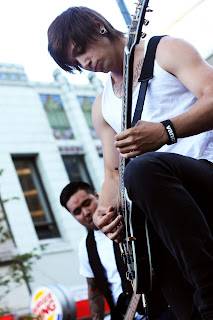 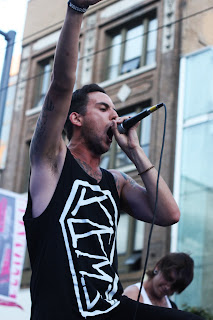 Gentlemen Prefer Blondes just finished setting up when we got there and we watched them rock the stage. Looking a little out of their comfort zone, playing with their amps facing the back of the stage (for sound reasons), they played a solid set. Trying to hype up the crowd and moving energetically around the floor they just seemed to not connect with the crowd as much as some of the later bands did. Some of it was due to the mixing of the sounds, such as, the guitars were down too much in the mix for their guitar driven hard rock, and the guitar solos were lost to peoples ears because of being turned down too much. But that definitely didn't stop these driven musicians from giving it all they had. 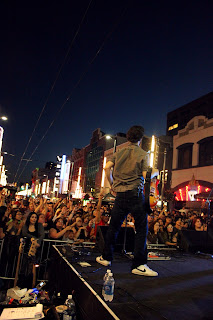 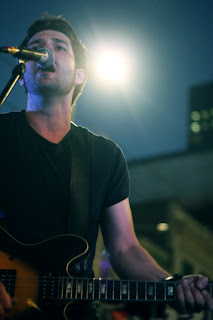 Louder Than Love brought everything up a notch as they played a beautiful set. You can tell this bunch of guys are born rockers. Each member displaying great stage presence and the singer really reaching out to the crowd and creating an amazing connection between band and audience. Their music was dynamic and full of life as they seemed to effortlessly pull off these challenging songs. The vocals were like candy as they poured out from the speakers, the guitars were huge sounding and could sound heavy and thick or crisp and delicate, the drums were godlike as they pounded from the back, and the bass was thick and heavy playing tight rhythmic lines. This band is going somewhere. So watch out! 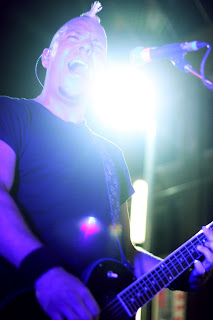 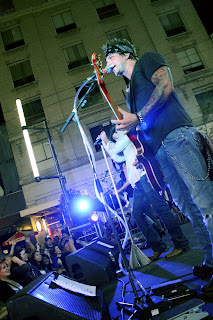 State of Shock just slayed. `Nuff said. Having never seen them before, I didn't know what to expect from this Seeds Winner from years before that have gone around spreading their music for years. Having some great hits (their most well known "Money Honey") I was eager to see how they played live. They blew all my expectations out of the water! Starting off with a backing track intro and ripping into a very catchy tune right away grabbed my interest, and continued to keep my attention the whole time with new twists, turns, dynamics, chords, solos, and every trick in a rock-band's sleeve as they just nailed their set. Little gems between band members stick out, some which are highlighted in the video footage, but the lead guitarist playing around with the rhythm guitarists microphone while he's playing was fun to watch, as well as when the singer leapt down and hugged the crowd while singing was perfect. This band made the show an experience the whole crowd will never forget. Combined with perfect playing and great tunes, this was a night to remember!
Full videos are coming soon! Bands! Here are some PICTURES! Contact us for the rest of the pictures:
hammerrecords@hotmail.ca
Hammer signing off.
Get Hammered!