Hammer and I were sad to have missed one of Hammer's biggest influences, Tom Morello, when he came through Vancouver last week; but were lucky enough to have our good friend Uri "Drum Skank" Soomer cover the event for us! 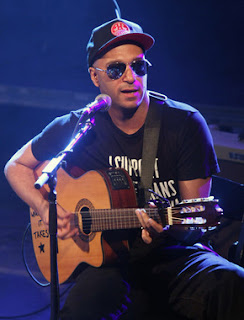 Living Guitar Legend/Renegade Tom Morello of Rage Against the Machine, Audioslave, Street Sweeper Social Club, and now his one man show “The Nightwatchman” made an appearance in Van City, Wednesday October 19th, to support our pursuit of happiness in the ongoing Occupy movement. I went down to the Vancouver Art Gallery with the intention of listening to the man speak and maybe play a couple songs. He showed up and indeed had a few positive words to say:

“This is a movement that is different from other movements”

“This is a movement that has correctly identified the bad guys,”

“This is a movement that has correctly identified the 99 per cent that are the righteous.”

“History is not made by presidents or popes, or kings or queens or generals, or CIA kingpins running dope,” he went on, quoting from Black Spartacus Heart Attack Machine, the opening track of his solo album "World Wide Rebel Songs."

“History is not made by nine robed men, or billionaires or bankers, it’s not made by them. Now they might throw a little money around, wondering who can be bought. Some might find they’re weaker, some stronger than they thought. Well we’ll stand right here, in our country, in our home. I used to think that I was alone, well….. I ain’t alone no more.”

After this was all said, Morello told everyone standing there that he was planning on playing a couple songs for us all standing in the rain… but that he had a better idea in mind. He asked everyone to line up in an orderly fashion at one of the many tents erected at the Art Gallery to score free tickets to his concert that night at the Vogue Theatre. The smiles just kept coming. After he left the stage, I promptly stood in said line and took my free ticket for the ride. Everybody got one. I walked a few blocks over to the Vogue with a huge smile on my face.

Now, I went down to Occupy Vancouver with enough money in my pocket for a coffee. I was completely broke due to book purchases and adult responsibilities. So for Mr. Morello to invite us all to his show for no cost…. It was simply unreal. A lot of my friends missed out on a really good time. But I made a few new ones in the process.

Two Seattle boys took the stage first (their names escape me…all apologies). It was a good intro for the concert. Just two dudes playing their guitars. Really mellow tunes. I enjoyed it. After they serenaded the crowd, big bad Tom came out on stage and the people there went ape shit. A friendly crowd instantly formed at the front of the theatre stage. Tom said a few more positive words and got right into the music. There must have been at least 6 different guitars on stage that Tom would switch in and out of throughout the show. He played to every style his creative mind produced. Tom invited fellow guitarist, Carl Restivo of the Freedom Fighter Orchestra, to join him on stage and play along. Restivo was most excellent and added a perfect element to the sounds we all experienced. As a drummer, I was wondering where the drums where at. In "Stompin’ Tom" fashion, Mr. Morello whipped out a Stomping pad and kicked the crap out of it as he and Carl rocked through the program. 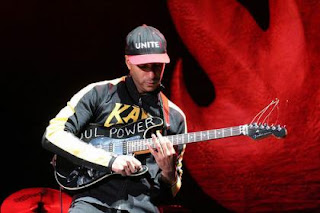 Of course, we all heard a couple Rage classics with a new spin taken to each of them. “Guerilla Radio”, and my favourite, a Springsteen cover “The Ghost of Tom Joad”. Most excellent indeedy. The time of tremendous excitement for me came when he picked up the classic “Rage Axe”. You know the one- The electric beast with all the flailing unclipped guitar strings skanking out. I lost my mind when he started shredding it up. It was amazing. All the unique tunrntablist-style scratching and cutting sounds, which -- by the way, was the sound Tom introduced to this genre of music way before bands like Limp Bizkit, Linkin Park, or Slipknot. This mothertrucker was doing it on his guitar way before that!!! Insano. He promptly took a page from the immortal Jimi Hendrix and proceeded to play the thing with his teeth… Everyone there went absolutely bonkers.

The crowd… the crowd in attendance at the Vogue that night was nothing short of amazing. There were a few “Pixie Girls”, as Tom labeled them, that decided to jump on stage and flower about. I thought it was pretty funny, although a brief show stopper, Morello made light of the situation and promised everyone that when the time came at the end of the concert, we would all have a chance to jump up on stage with him and sing along. He had an awesome sense of humor and it came out every time he spoke to the audience. I was smiling the whole entire time. A real cool cat for sure. That time did come, and plenty of the crowd did indeed jump up there on stage with the man. I didn’t want to cramp the scene, so I went up into the balcony to get a good view of the final countdown. Tom got everyone in the place to sing along with him as he rocked the new “World Wide Rebel Songs” off of his new album with the same title. It was epic.  I left the Vogue still smiling, hopped on the skytrain, got home, and slept like a baby. I got up the next morning with an amazing story to tell everyone.

Now, his music and his positive vibes are Occupying Movements world wide. Tom has been to New York, Los Angeles, Seattle, and now Vancouver to support us in what we’re trying to accomplish. He’s keeping on with the tour (which has been going on for a long long time) with the good word to try and cure our ills. My thoughts?? Basically is that we are all tired of the negatives we face in all cultures and walks. Inequality and greed have created some pretty bad situations for a lot of our sisters and brothers. My old friend Chris said this, “ When we get sick, most of us try to ignore it and hope it goes away. Eventually it gets bad enough that we have to go see the doctor.” I think now is the time for all of us to go see that doctor, come together, and share ideas on how we can all prosper and be happy in a progressive flow of positive togetherness. Tom Morello is a true renegade. Please check out his music and listen to what he has to say. He has been inspiring me for years now, and I’m sure he’s got something for you as well.