Are You Ready For The Apocalypse? 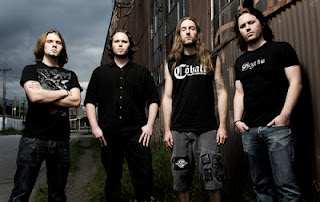 So it’s 2012 and the end of time may be near, or so they say, but that’s no reason to panic because Vancouver-based metal masters Titans Eve are unleashing their second full-length album, the extremely timely and aptly titled,Life Apocalypse.
The perfect musical end for the perfect apocalypse, the 11 tracks of Life Apocalypse were produced by Titans Eve and recorded by Sacha Laskow of Divinity at Perfect Fifth Studios in Calgary, AB in a manner that was strikingly different from the band’s first foray into the studio while creating their critically-acclaimed debut, The Divine Equal. After all, time was of the essence.  “This album was written faster and was more of an aggressive attempt at writing and recording an album,” says guitaristKyle Gamblin. “We hammered out the songs and bunkered down to record in Calgary with Sacha Laskow for a month and recorded every day.”
Taking a turn from their debut, which was released in February of last year, but staying true to their personal interpretations of honest, powerful modern metal, “the result, Life Apocalypse, shows our efforts and captures the best performances from all four members of our band. We worked very hard to deliver something that wouldn’t disappoint fans of our last album,” says Brian Gamblin.
Following the release of Life Apocalypse this summer, Titans Eve will once again pile into the “Titan Train” (i.e. their 2007 Ford E-350 van) and travel across Canada, bringing their music to as great an audience as possible, supporting Canadian metal heavyweights Anvil and Kill Devil Hill, the new project featuring acclaimed drummer Vinny Appice(Black Sabbath, Heaven and Hell, Dio) and bassist Rex Brown (Pantera, Down)

Posted by Hammer Records at 2:36 PM