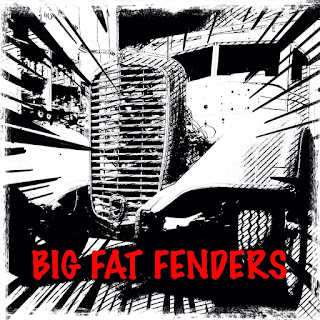 If you even think of missing The Roxy Launch Project battles, then you are out of your mind! Go support these bands battling it out for some great prizes. Go see as many nights as you can! We spoke with Greg Bishop about the Big Fat Fenders crushing the other bands!

Hammer Records: What made you enter the Roxy Launch Project?
Band: We've developed somewhat of a relationship with The Roxy (and Nimbus) over the past few months.  We attended the Breakthrough Music Conference in March and have played The Roxy several times.  It becomes apparent quite quickly that these folks are all about "Community".  They are supportive and professional and genuinely interested in helping artists build their careers and in strengthening the music scene here in Vancouver... and the contest takes place in a first class venue with a great sound system and dedicated support team!  What's not to like?

Hammer Records: Which of the prizes are you most looking forward to?
Band: This may sound a little corny, but the prizes - as fabulous as they are- aren't on the top of our list of motivators.  We've already attended a pre-Launch seminar and gained valuable knowledge from the presenters.  The opportunity to have people hear our music, the opportunity to network and make connections with people in the industry... these are opportunities that it's hard to put a price on.  Would we like a financial windfall to help boost our career and the chance to work on a single with a renowned producer in a world class studio and have the single promoted and distributed?  Who wouldn't?!  But we are focused on the opportunity, not the prizes.  The journey, not the destination.  (See?  I told you it would sound corny!)

Hammer Records: How are you going to get fans out to your show? Any special tactics?
Band: We have not ruled out arm-twisting, threats and kidnapping, but we thought at first we'd start off with a social Media Campaign and some direct invitations to our friends and Super-fans.  We might also follow up with some good old fashioned begging and pleading!

Hammer Records: Will you be doing anything special at the show?
Band: That's a secret! (But we have been known to bust out a surprising showtune now and again...)  We may also perform one or two brand new songs we've written... You'll have to wait till August 12th to know for sure!

Hammer Records: What do you think of battle of the band competitions around the city? Do they help build the scene?
Band: We don't want to comment on any specific competitions.  Suffice to say that contests which offer little more than a venue but require artists to promote and put bums in seats to fill the bar on slow nights can seem a little one-sided.  The organizers and sponsors of The Launch Project on the other hand, recognize the efforts and legitimate expenses of promoting and playing a show.  Proceeds from ticket sales go directly to the artists responsible for generating them, and the events are scheduled on prime summer weekend nights.  That approach speaks well for the integrity of the competition and, under those circumstances, I can definitely see them helping build the scene.

Hammer Records: What are some of your social media links? Where can people find your music?
Band: We are proud to have recently launched our new website; www.bigfatfenders.com There, fans can check out the band, book tickets for upcoming shows and most importantly, listen to and download our music!
If you prefer Facebook, we're at https://www.facebook.com/bigfatfenders/  Come by for a visit and make friends with us!


We post some cool pics of the band and some cool Hot Rods at https://www.instagram.com/big_fat_fenders/  and a little birdie told me you can tweet us @BigFatFenders https://twitter.com/BigFatFenders
Posted by Unknown at 9:20 PM