Is It October Yet? 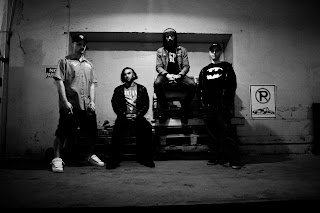 Dear Coward is a four piece grunge rock band with a post-hardcore flare. Having been in the shadows, perfecting their craft and stage show, their first single "October" shows exactly what the band is capable of. This track is full of heated emotions, broken strings and stadium chants. Perfectly recorded, the drums are tight, the bass is locked with the kick and the guitar has so much crunch that you would swear Captain Crunch is playing on this track! This band reminds me of Stella mixed with Foo Fighters that had a baby with Alexisonfire. Their bombastic sound should go over well with the heavier crowd as well as the more straight rock crowd. This song is truly meant to be played in stadiums though!

When Dear Coward hits the scene with their full force, it will be a quick rise to the top if every track has the energy of this! Don't miss any of their shows. Check out more of the band on their Facebook page HERE.
Posted by Unknown at 8:27 AM