Straight To Your HEAD 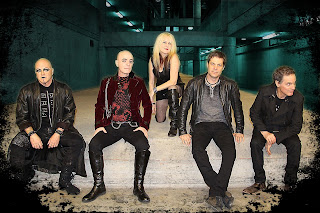 HEAD is a Vancouver rock band who just released their debut album "Afraid To Sleep". Their stage show is fantastic and the characters they have created for their on stage personas are epic. Reminding me of a mix of Nighwish, Kamelot, Rob Zombie and Marilyn Manson. Their album shows their dreams for each track realized into an epic sonic package for listeners.

Each of the tracks shares great production value. Every instrument is beautifully recorded and the transition between different ideas flows like wine. I would have loved to see the writing process while they worked their ideas into this orgasm of sound. Something very sensual stems through each song. A certain sexuality in each song just like someone whispering in your ears. It reminds me of a lot of older tracks from the 80's. Almost a Madonna feel on some tracks. On a dime the lead singer can switch that sensual feeling into a dark mysterious vibe, and even at times take it even further into an almost stalkerish tone. The vocals on every track are so full of emotion and depth. The effects are well placed and really fill out the track. This is one band that I hope they have vocal effects for their live stage show. Since a lot of call and response or harmonies really play a key part in the track then I hope the rest of the band fills out the sound in a live setting.

Diving into the guitar on the album. Fantastically placed parts. Not overall busy, but not simple at all. Each riff just beautiful compliments the energy of the track at that time. Really filling out the tracks. At times I wish it was a bit louder in the mix, a little more even with the synths just to give it a bit more edge, but thats just the metal head in me speaking. A lot of the tracks remind me of a very Alice In Chains feel. Some great guitar tones are on the album. In "Darkness" there is this almost sitar feeling guitar. The crunch on some songs is nice and thick but yet you can still hear great distinction on the chords.

The bass and drums are perfect for this genre. Just adding a thick level of groove or drive. Either pushing the song forward with some tension and pushing the beat. Or, sitting back and letting the songs have a nice swing feel to them. At times i wish the drums got a little crazier, allowed to be a little more in the forefront. If this album was being mixed for TOP 40 then I would have liked to hear a thicker kick drum so really get that drive that some of the songs seem to lack. Sometimes the synth's lower end just seems to take over where the thickness of the kick drum would be. I really enjoyed the track "Save Me" but wished it was either a bit faster or a bit punchier.

The synth/keyboards are a real leading force in these songs. They really add so much depth to each song. If the rest of the band was a cake, then the synth would be the icing. Not necessary, but it makes the whole thing taste so much better! It makes HEAD stand out from so many other bands on the scene. It adds a sound that can either push the envelop or bring back some flavours from the past.

The album as a whole is a fantastic piece of work. Full of dynamics, hooks and well written songs. I could easily see me playing the entire album on a road trip with the windows down. A lot of these songs have some radio potential but I'd have a hard time picking one song to be their leading single. Each track has a unique take on the band, when you listen to the album as a whole, each track stands with each other quite nicely. I would really recommend going over and touring in Europe or Asia. This bands sound would just thrive over there. It would be harder to break into the North American market with this sound as its almost a very niche sound now a days. A lot of people are tending to listening to harder stuff or lighter material and theres not much middle ground on the radio now a days. I can't wait to watch to see where the bands takes their music next. It was a pleasure listening to the album in its entirety and I recommend anyone listening to their music do the same.

Check out their website and social media links below:
www.headmusic.ca