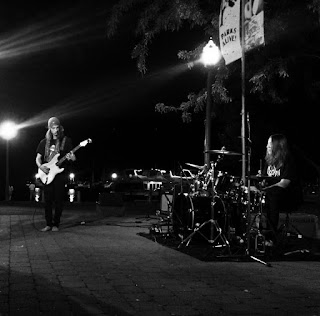 What is Snur you may ask. Well, Snur is a Grunge band from Lake Country, British Columbia. This duo reminds me of what the raw grunge sound coming from Seattle must have sounded like in the beginning. I admit, Snur is quite progressive but this is what the sound from the jam rooms of Mother Love Bone, Temple Of The Dog and Soundgarden back when they first started.

The musicianship on their self titled demo album is fantastic. These two really have a solid groove and sound locked in. At times reminding me of Led Zepplin in the tightness between the drums and the guitar. The drums are never overly busy, just filling out the sound and adding depth and groove. The guitar does a fantastic job at adding all the grit and melody. Where as the vocals sit between the two, almost adding more attitude than melodic hooks. The intensity of the vocals do a great job at making things very dynamic and never stagnant. This band can go full bore and then soft at a drop of a hat, which really helps keeps the interest of the audience.

I can't wait to see how the band develops and hopefully adds a few more members, I think a solid bass player would just make the sound so much thicker and add a whole new flare. Specially if the bass player wasn't just playing root notes all the time. In the demo I can hear some bass through the demo but I think finding a more progressive bass player might really add something to the band. I also would love to see the drummer do some back up vocals. Just adding more depth to the sound. With a smaller band, each member part is so much more important. Even just doubling some of vocals during the chorus would make such a huge difference.

I will be keeping my eye on his band and I suggest you do the same! Be sure to catch them at one of their upcoming shows. Check out their Facebook page HERE.