Back when I was in a band, I remember sharing the stage with Crimson Roots and being shocked at how tight and amazing they sounded. Now after almost a whole year later, Roxy and I caught them at the Railway Club with The Hutchinson Effect. 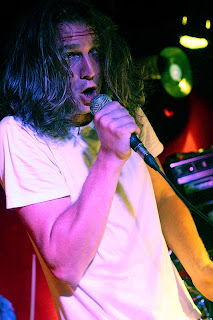 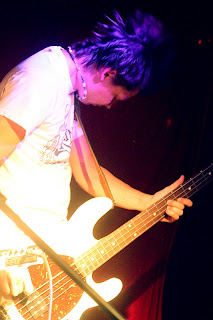 The Hutchinson Effect was as unique as their name. A merge of two old bands to create this juggernaut of sound. This was their first show and it showed of course, but you can tell they are old pros at being on a stage. All very sound musicians but some songs were tighter than others for sure. The singer was definitely the most eccentric. Leaping around the small stage and swishing his Led-Zep-esc hair around. Showing off his dance moves during some of the songs he did what appeared to be a small jig. Very strong bass lines and craft full guitar work complimented the vocals. The drums were interesting for me, instead of playing a straight ahead rock beat he often switch to almost a shuffle beat during some songs. A very interesting spin and added depth to the songs. Definitely catch these guys at their next show! 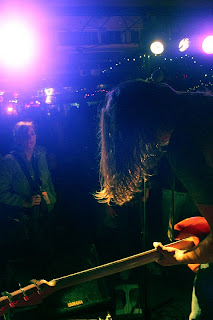 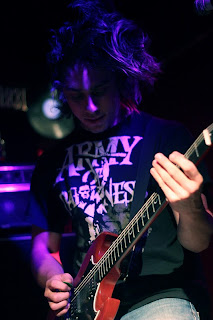 Crimson Roots took to the stage and started off with a classic stoner rock tune to set the mood for the rest of the set. Heavy riffs tighter than the Pope's shut eyes. This band has progressed so much since I last saw them. Songs are well written, sensible length, great riffs, varying vocals in different songs, and the sound is always dynamic. A key element in their set was there between songs there was little to no gaps in sound. At the end of a song the bass player would hit a delay pedal and have his last bass lick repeating until they launched into their next song, or the drummer would keep the beat going, or the guitars would do some back and forth licks. It makes for smooth transitions and never loosing the audiences ears. A big plus was that all of them sang, either lead or backup. Made for rich harmonies and easier for the crowd to roar along with the band.
Check them out on FACEBOOK

Bands, if your looking for the rest of the pictures and/or HD video of some songs email us:
hammerrecords@hotmail.ca

Here is a teaser video!

Posted by Hammer Records at 1:28 PM