The second night of the Fox Seeds! First, we'd like to apologize to Sam Weber for missing his set. It was Last Shelters' first show and we could not miss it. Luckily, it was across the street at Joe's Apartment, so, we just hopped over and hopped back! 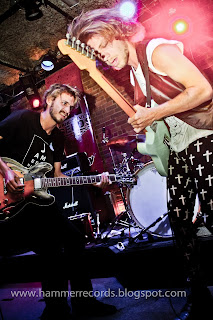 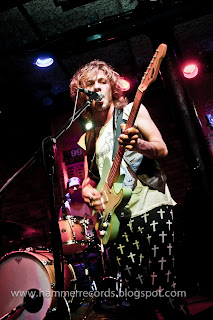 The Dirt was up first and dirty is such a great word to describe them. Their front man is true rock and roll. The way he dresses, his mick jager swagger, and his guitar playing just scream rock and roll lifestyle. Great stage presence as he sang his tunes. The drummer was pounding away and looked like he was having a blast! The songs were fantastically dynamic. Quiet parts followed by a great growing crescendo leading into monsterous choruses! The rhythm guitar was fairly solid, but I found both the rhythm guitarist and bassist not quite matching up to the performance level of the drummer and lead guitarist. That said, the rhythm guitarist did a great job playing tight pocket guitar and adding a lot of texture. The bass lines were thick and fit well into the tunes. Would love to see this guys on stage again, definitely a show! 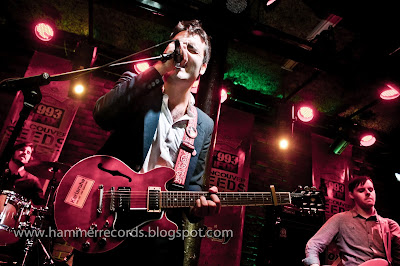 JP Maurice closed the night with quite the opposite sound from that of The Dirt. JP Maurice had a very produced sound, yet fun and quirky. A certain charm radiated from him, reminding me of a "rockier" version of Michael Buble. After hearing his recorded stuff, I really like his vocal tone. I felt that his live vocal performance didn't quite do him justice at the Roxy. His voice was buried a little in the mix (at least from the front of the stage) so, I couldn't hear his full dynamic tone. He had great stage presence, moving nicely on stage and really making friends with the audience. The musicians he had on stage with him had played well, but they came off seeming shy and almost sad. The bassist barely cracked a smile the entire set. I would have liked to see his back up band make it more of a fun experience. The tunes themselves are really fun sounding, so why not make it a fun night? JP's charisma really filled the room though. He seems very talented and his tracks sound amazing! I really hope to see him again!

Big thanks again to The Roxy and The FOX 99.3 for a fun and great night! See you again tomorrow for The Flu and SplitTRACT!

For full photos click HERE
Posted by Hammer Records at 2:02 AM