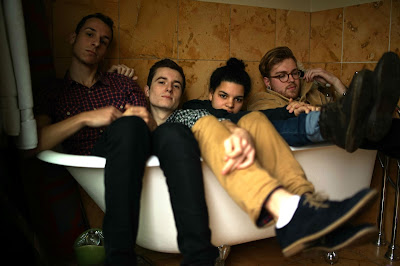 Alma Cassels are a Toronto-based indie-rock band with a loyal group of young fans. Formed by high-school friends, Brooklynne Morrison (Guitar), Cameron Marshall (Vocals/Guitar), Jaden Spanier (Drums) and Alex Gluch (Bass), they blend the dance-inspired beats of British bands like Foals with intricate guitar riffs and catchy radio-friendly melodies. This is their first time at Canadian Music Week. Follow the band's adventures on Snapchat and Periscope via @AlmaCassels

Hammer Records: Tell us what you think of when you think Canadian Music?
Alma Cassels: I think of good ol' Canadiana bands like: The Tragically Hip, Barenaked Ladies and Castle River. Then more upbeat acts like Yukon Blonde and The Elwin's. However the perception of Canadian music to most is still feel good, laid back, knocking back beer in a canoe music. I think Canadian music is a bit underrated in the sense of indie mainstream presence.

Hammer Records: How did you get involved in Canadian Music Week?
Alma Cassels: We were always being told we ought to play festivals like NXNE, CMW and Montreal POP. They're among the many great festivals we've seen and heard our mentors play at. CMW has always been on our list but it's only now that we're starting to build a team around us that we've got the resources to apply for these bigger shows.

Hammer Records: What do you have planned for Canadian Music Week?
Alma Cassels: We are a family and that very much comes out while we perform, both function and dis-function occur. One moment we're jumping apart and the next we’re playing back to back. There is this intense emotion that we portray in our music and movement, we try for there to never be a dull moment.

We're also always looking for new ways to include our fans in our performances and interact with them directly - this year we'll be live-streaming some of our shows using the Snapchat and/or Periscope app so that our fans around the world can join in. Download the apps on your phone and follow @AlmaCassels for more information.

Hammer Records: What message do you want to send to Canadians listening to your music?
Alma Cassels: That we want to break past the 'underrated" bar and push past the sleepy, laid back perception of Canadian indie music. People want dance parties and we want to be the ones to cater them. We want people to understand the fusion of art and music and the fluidity of emotion with motion that comes from a band of dedicated musicians playing live.

Hammer Records: Whats coming up for Alma Cassels?
Alma Cassels: We're just putting the finishing touches to our debut EP which will be available on iTunes, Spotify, Bandcamp and our website - http://www.almacassels.com We're also planning a tour this year with loads more shows including some festival dates. We're looking forward to getting our new music out there.