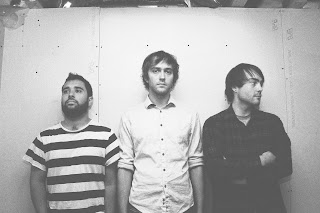 These three lads had a quick conversation with us about Canadian music. Be sure to check them out when they are performing at Canadian Music Week.

Hammer Records: What do you think of when you think Canadian music?
Bike Thiefs: The Tragically Hip, Matthew Good, Rick the Temp’s Haircut, the quality of the ecstasy on Electric Circus. But mostly METZ.

Hammer Records: How did you get involved in Canadian Music Week?
Bike Thiefs: We applied and fabricated a really sad backstory about the band overcoming adversity so that they could use that to help build a buzz. It’s basically the plot from Erin Brockovich.

Hammer Records: What do you have planned for Canadian Music Week?
Bike Thiefs: We once played with a band that covered Blur’s “Song 2” with a half-time breakdown. So, since that’s taken, we’re going to do a medley of that Gary Glitter song and the intro to “Crazy Train” - basically every song that you would hear at every sporting event ever.

Hammer Records: What message do you want to send to Canadians listening to your music?
Bike Thiefs: Make sure to take vitamin D, even year round, it’s really good for your mood.

We’re sorry if that one song was really loud, but maybe you’ll like this other one a bit more.

Hammer Records: What is coming up for the Bike Thiefs?
Bike Thiefs: We have some touring plans set for the summer, that should be sorted out soon. We also have new material ready to be recorded. Hopefully we’ll be tracking the new stuff by the summer in between tours.