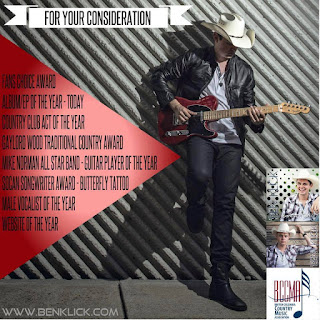 Being nominated for awards is not something Ben Klick is foreign of. Through his excellent career he's received many pieces of recognition. We had a quick chat with Ben about what country really means to him.

Hammer Records: How does it feel to be nominated for an award? What do you think made you stand out?
Ben: There is so much talent in the community, and in other cities and provinces. To be nominated for an award, alongside friends, family, and other artists, musicians, and industry professionals that I look up to, is an unreal feeling. The band and I are honoured to be listed beside so much talent in the British Columbia Country Music Association (BCCMA)!
Our bands performances are fun, interactive, and high energy. We take pride in our social media and online presence, and love to take the time after shows to talk to and meet anyone in the crowd who would like to come say hi. Over the last year, I’ve travelled back and forth to Nashville recording our sophomore EP that was released in September of 2015 with 3 debut singles out to Canadian Country Radio; one which made it into the Top 100 of the Canadian TRAX Charts earlier this year.

Hammer Records: What do you have coming up in the future for your fans?
Ben: Throughout the Fall and Winter months, the band and I will be working on new music (including writing and recording), as well as working on and developing new set lists of songs for shows moving forward into the Spring and Summer performance season. We are looking at releasing a new single in early 2017, and will be looking into getting onto the Country Music Festival circuit and reaching out to provinces outside of BC in the new year.

Hammer Records: Do you think there are enough venues playing country music? What do you want to say to the fans of country music?
Ben: Without the fans who come out to every show, and support each of their favourite artists, we wouldn’t be able to do what we love to do. It’s because of the fans that we get to live our dreams, tell stories, connect with people, and play music.
Country Music is rapidly growing. There’s so much variety. Country Music allows artists to be themselves. There are lots of venues who play and support country music and all of the artists involved in the genre. I like to listen to and support music of all types. The music scene is constantly expanding, and as long as there are places to play music, the scene will be alive and well!

Hammer Records: What other artists in the genre do you look up to?
Ben: My first inspiration in Country Music was Shania Twain. I was 4 years old when I saw her as my first concert. I had a little purple microphone and a plastic guitar I used to dance around with, and at the concert, I had my eyes glued on her guitar player. This got me started on my path through music. Once I moved to the Okanagan, I started listening to Brad Paisley and Keith Urban. Being a guitar player, I was quickly inspired by their playing styles and wanted to be able to play like them. In our live shows, we play everything from John Denver and Merle Haggard to The Zac Brown Band, Brad Paisley, and Keith Urban, as well as play our own original music, both released and unreleased.
On a side note, other influences include Canadian Folk Band, Great Big Sea, and I grew up listening to the Top 40 pop, and classic rock stations.

Hammer Records: What advice do you have for country artists that are just starting out?
Ben: Over the years, I have had industry professionals, artists, and musicians, as well as college professors and mentors share experiences, stories, and give me advice and guidance. Each conversation and piece of advice I am very grateful for. A few of the ones that stuck out include:
“There is no recipe to success. All I know to be true is ‘Talent, Commitment, Sacrifice, and Attitude’” - Brett Kissel
“Don’t Stop. There will be times you feel the ‘ball stop rolling’, or feel as if you aren’t getting any further along your career path, however, don’t let it get you down. Keep your head up, and keep pushing forward.”  - Corey Bell - Okanagan College Professor (Audio Engineering and Music Production)
Lastly, believe in yourself. Write what is true to you, and follow your gut.


Ben: The band and I are all over social media! You can find us at the following links:
Official Website: www.benklick.com
Facebook: Ben Klick’s Music
Twitter: @Ben_Klick
Instagram: @Ben_Klick
Posted by Unknown at 10:18 PM