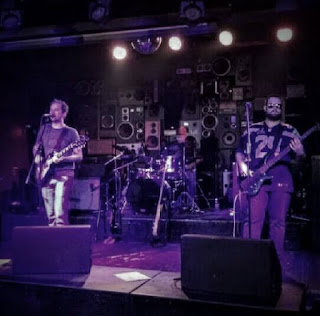 Bring the grooves, Pretty Idiots hopes to claim the prizes from this years Best In Vancouver competition. We had a quick chat with the band about their thoughts on the upcoming performance.

Hammer Records: For those who might not be familiar with your band, can you give a brief description of the sound of your band?

Pretty Idiots: It's loud. It's soulful and it's riddled with grunge angst. Mix any band from the sup pop days with John Mayer(like early John Mayer, not like Daughters singing John Mayer. A cross between those two might be too epic to handle).
Hammer Records: Have you checked out past “Best In Vancouver” competitions? What do you think gives your band the edge on the competition?
Pretty Idiots: We've had a chance to check out a few, some great bands and we are really excited to hear some new music during this competition.
I really don't feel comfortable answering this part of the question. If I tell someone what my edge is and then they copy my edge.. then I have no edge and this whole question is irrelevant. ~C~
Hammer Records: What do you think of the battle of the bands competitions? Do they help build a scene?
Pretty Idiots: Of course. All PR is good PR and to have a company like Moozuka throwing their support behind it.  This will hopefully lead to a lot of great exposure that we otherwise may not of had the chance to get. ~B~
Hammer Records: What do you want to say to the sponsors who are helping putting on the event?
Pretty Idiots: 2 cups flour. 1/2 cup milk. 2 tsp baking soda. Pinch of salt. 1 egg and a thimble full of vanilla. Mix lightly until ingredients are together but not beaten into a straight liquid.  Warm a frying pan on medium heat, until water forms beads on it, when you use water to see if it's warm enough..but not a lot of water. Like sprinkle some water on it.  If it forms beads you're good to go.  1 cup batter per pancake.  Cook until bubbles have formed and burst, flip and cook until golden brown on both sides.  Serve with butter and your choice to flavored syrups. But I recommend maple syrup.  Keep it canadian. ~C~
Hammer Records: Aside from playing the showcases, what is in the future for the band?
Pretty Idiots: We will be playing at the Media club on October 28th, and hopefully the finals of this contest in November.  We are also headed to the studio soon to record a nice shiny new EP.
Hammer Records: Do you believe in promoting with handbills or other methods that aren’t online? Or do you think that online promotion is key?
Pretty Idiots: When we started out, it was all word of mouth, getting friends excited about seeing us play. As we started playing more shows, we needed a way to reach a larger audience.
We have found that in the social media world that we live in, people no longer pay attention to hand bills, posters on lamp posts or flashy signs. Invite someone to a concert and they ask for a Facebook invite.  Nothing is official till it's Facebook official.  So social media is a key to being able to remain in the public conscience. It also gives us a chance to interact with our fans on a far more personal level. ~B~
Hammer Records: What are your social media links and how can people find your music?
Pretty Idiots:
www.facebook.com/prettyidiots
www.soundcloud.com/pretty-idiots