Best In Vancouver - The Fallaways 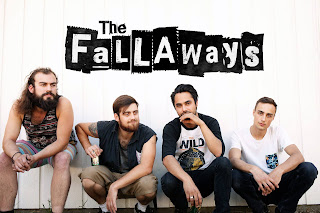 The Fallaways hail from Kelowna and one of the most put together bands we've seen in a while. Their professionalism of their online presence speaks for itself. Seeing their tour plans and radio meet ups already shows that his band has things in motion for themselves. We spoke with the band about their thoughts on the Best In Vancouver competition.


Hammer Records: For those who might not be familiar with your band, can you give a brief description of the sound of your band?
The Fallaways: The closest thing i can imagine is if you combined a band like WEEZER with FIDLAR

Hammer Records: Have you checked out past “Best In Vancouver” competitions? What do you think gives your band the edge on the competition?
The Fallaways: This will be our first time. We've put the time into it and we've been seeing the reward. No reason to stop now!

Hammer Records: What do you think of the battle of the bands competitions? Do they help build a scene?
The Fallaways: Growing up in a small town where they didn't happen all that often i can see them helping with the scene. Its definitely a place for all genres to intertwine.

Hammer Records: What do you want to say to the sponsors who are helping putting on the event?
The Fallaways: Events like this are the what keep a lot of musicians with some form of anticipation.. seems needed in an industry as tough as ours. Thank you!

Hammer Records: Aside from playing the showcases, what is in the future for the band?
The Fallaways: Radio Play, Tour, Music Videos, Parties... hopefully careers?

Hammer Records: Do you believe in promoting with handbills or other methods that aren’t online? Or do you think that online promotion is key?
The Fallaways: i think it depends on the people. Online promotion IS necessary these days. i see some great bands struggling simply because they lack in social media skills or effort.

Hammer Records: What are your social media links and how can people find your music?
The Fallaways: https://www.facebook.com/TheFallaways  -  New single drops September 17th!