Orwellian - Visions Of The Future 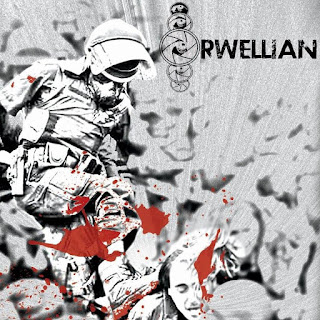 In these bleak times, we need metal more than ever to inspire us, allow us to vent our anger and raise our fists at authority. Their name derives from George Orwell "Orwellian" is an adjective describing the situation, idea, or societal condition that George Orwell identified as being destructive to the welfare of a free and open society. It connotes an attitude and a brutal policy of draconian control by propaganda, surveillance, misinformation, denial of truth, and manipulation of the past.

The band has had great success early in their career and continues to push forward. Their unrelenting metal being a rally point for metal heads all over the world.

Their latest album "Visions Of The Future" just dives right into a blistering drum beat, catchy guitar hook and low guttural growl that will set the stage for the whole album. The opening track "Abandoned" reminds me of a mix of Mastadon and Pantera. The passion and ferocity of Pantera mixed with the melodic but driving riffs of Mastadon. The guitar solo mid track adds a perfect little feature for any guitar lover to really hear some epic shredding. This track would have anyone headbanging right away as its catchy riffs are just so infectious.

"The Gift" is almost straight up early Trivium and Lamb Of God. This track just speeds along with some hard hitting riffs. The bass and drums are locked together perfectly to allow each little guitar riff to really hit home. Vocally, this track has some epic moments but it seems to be more of a guitar driven track for sure. Once again, mid song guitar melody just takes the reign and just gets stuck in your head. The resulting breakdown after, would be epic to witness live on stage. Leading towards a ear ripping guitar solo that is front and center in the mix. The delay effects at the end of the tracks before the final breakdown was fantastic and I hope to see more of that later on in the album.

"Relapse" just like it's name is dark a brutal. Like a shot of heroin, its darkness straight to your heart. The reverb on the vocals give the audience the illusion of a bad trip and it only gets worse. Gone are the melodic guitar hooks. An almost Spanish, middle eastern feel comes to play with an abrasive screeching guitar solo. The drums remind me of every expert level drum track in the video game Rock Band. Endless blast beats and enough double kick to put you in the hospital. The track ends with eerie creaking and scraping sounds like the audience is finally driven insane and taken to an old abandoned insane asylum.

The Fourth Track "Novel Of Despair" keeps in the darker vein but this time adding more synchronized hits. The band goes from stopping on a dime hits, to breakneck galloping speed riffs. The doubled heavy vocals adding emphasis on different words really adds to the feel of the track. Fantastic delay on the vocals allows a sense of space that was lacking on previous tracks. The time changes in this song are fantastic, giving each section a unique vibe and keeps the whole track feeling fresh.

Perhaps the fastest track on the album "Guided By Fear" just takes the audience straight into the fiery depths of hell. The drums stand out particularly well on this track by their sheer impressive ability to keep going with such ferocity and drive. The vocals seem like at any moment the singer's heart could just give out. His screams are so intense that they easily cut through the track and the urgency in the tone gets your heart rate sky rocketing at sections. Finally the tracks ends, and your heart might have exploded because you hear the angels sing, taking you to the great light in the sky with a fantastical masterpiece of composing.

"Tyrant" keeps the strings and choir in the track as they bring you into the kingdom of fire. A lot of galloping riffs make you think of horses returning to the castle of this Tyrant. The vocals remind me of Murmaider from Dethklok and the whole track started to remind me of one of their tracks at times. Having heard the rest of the album, this song stuck out as not as polished as the others. Near the end of the track it picks up with an awesome vocal effect and bringing in the orchestral feeling again, but for a long stretch of song I was left with my mind starting to wander.

The final track "Kodiak" wraps everything together and pushes a more progressive feel. This track has more stops and starts than any previous tracks and they really work in bringing in the audience and keeping my ears interested. The bass takes center stage at a couple moments putting some fantastic epic bass fills in between hits. The slower part of the track really allows the band to show some great clean tones and allowing the vocalist to show a whole new light of himself as they build back up to this epic doom inspired riff. Cranking things back up to 11, the band closes the album with an insane double kick driven madness. This is where the circle pit would emerge and everyone give it all they had for one final push. Ending the album with distinctive end really makes me appreciate what I've just listened to as a whole. I quickly que up the first track again and am ready to dive back into 1984.