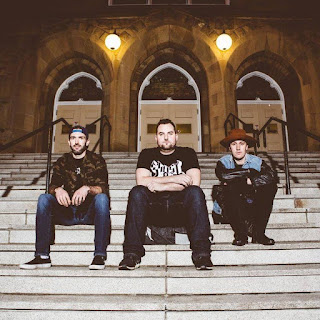 It came from the swamp... well in this case Possum Pocket, Alabama. Well truthfully, it actually came from Alberta, Canada. Now residing in Calgary, Silence The Swamps consists of three high school mates creating this swamp water mix of punk, grunge, and surf. They just released their debut album and are proud that each members influences are equally represented in the album.

The album opens with "White Space" which you hear the good old swamp from Possum Pocket. Then the swell of a dirty guitar leads you into this classic punk bass and drum groove. Reminding of of classic old school Offspring slightly with the chorus hook. The dirty guitar nicely in the background leaving ample room for the vocals to take the forefront even though a nice reverb gives the singer a New York Punk sound. The track gets you ready to enter the murky waters of Silence The Swamps.

"Matlock Malfunction" brings a pop punk feel in the beginning with a very Blink 182 sound but quickly dives into a very dirty punk riff that adds a great dynamic between parts. I can just see the crowd go wild when that busts out. Taking another turn for a short bridge a surprisingly catchy hooky vocal comes along. Love isn't always dead will be stuck in your head for hours. Ending the song with returning to that fast punky riff just seems like perfection.

The heat gets turned up for track number 3 titled "Private Reaper". this Horror Punk track channels this great energy that just makes you want to crank the volume up on your speakers! The thick bass really drives the whole song and gets your head banging and feet moving! This track would be killer to see live! The sheer raw energy captured in this track adds a whole new dimension to this album.

"Nightmare Sequence" keeps up the energy by turning up the tempo! The drums are mixed thicker and have more edge to them for this track that really brings up the ferocity of the track. Some nice dynamics keep this track fresh and catchy vocal hooks will have you singing along in no time. The first guitar solo of the album is also featured in this track and in true punk style it has its own unique "I don't give a fuck" feel. The drums are just blasting away and have such a nice bite that really shows off the drummers skill, they really carry the whole track.

"Problems In My Head" starts with a huge in your face guitar riff that sets the tone for this track. The vocals have almost a desert rock feel to them that brings out this new sound with more bite. Once again the chorus has this skate rock anthem feel that could be on any skate video or played at any stadium arena. The 2nd guitar solo has a very surf rock vibe that fits so perfectly. If any song was going to hit the radio, this track would be eaten up by fans of Pennywise, Bad Religion, The Clash and any fan of just good music.

The sixth track, "Bok Choy" has more of an underground feel than the previous track. Reminding me of Smashing Pumpkins, this track has a more music festival vibe than stadium arena vibe. Sounding more like the punk band you would see while waiting for the band you bought tickets for, but instantly fall in love with the band and go buy all their albums. This is the kind of track that is played in all the college bars. At the end of the movie "Euro-Trip" or just played in your walk-man while your laying on the bed at your parents place contemplating life.

"Floyd The Barber" really blows the hairs right off your head! Bringing the dirty grunge out, this track has more distortion and such a darker feel than the other tracks on the album. This would be the climax of the set, having the whole crowd just going nuts as the band blasted this tune, amps turned up to 11. Its a shame its one of the shortest tracks on the album, but I could see the band playing an extended version of this track at shows just allowing the crowd more time for moshing!

The final track "Skulls" is actually the shortest song on the album. Bringing back the classic sound of this album, this track really sums up the album nicely by its catchy vocal hooks, tight crispy drums, thicker than molasses bass and thick and rich dirty guitar. This album is a great summer album, stick it in the car when your going on a road trip or even driving to the supermarket. Put it on at a party and watch as everyone just instantly starts bobbing their heads. As I'm reviewing this album, even my 3 year old son is dancing in the background to this final track. Do yourself a favor and grab this album for your iTunes collection.