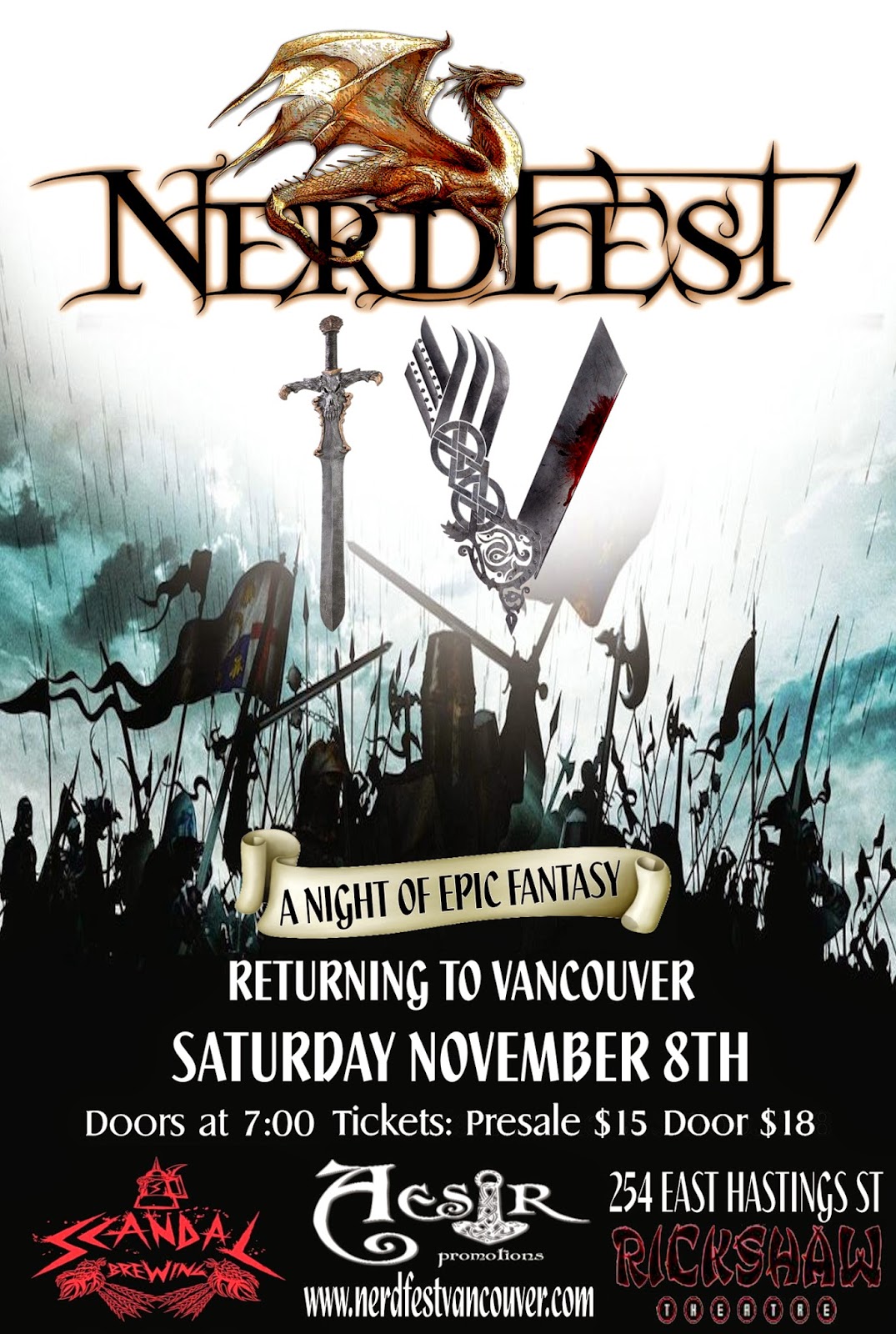 Come One! Come All! For a night of EPIC fantasy! with your swords, your knights in shining armor, and your beer maidens as Aesir Promotions presents Vancouver, BC’s fourth annual NerdFest at Rickshaw Theatre on November 8th. Headlined by Whithorse, YT’s The Whiskeydicks, a group of Celtic Gypsy party rockers who have spent the better part of a decade carving a reputation for themselves as “One Hell of a Good Time” using fiery fiddle licks, cello played like a bass, bombastic trumpet, vivacious drum beats, energetic guitar strumming, and voice to tell stories of good times past. The Whiskeydicks play songs people know but in a way they’d never imagine. Their formula works and has earned the band acclaim from audiences everywhere. Nerdfest will also be their CD release show for their new self-titled and fourth studio recording.
“If Gogol Bordello and the Corb Lund Band got drunk, hooked up and then nine months later popped out a little whippersnapper, that baby would probably be the Whiskeydicks. That is to say this BC-by-way-of-Whitehorse band combine various elements of Celtic, country, rock and Gypsy music and filter them through punk sensibilities and a rowdy disposition.” – Exclaim! Magazine
In addition to the headliners, the night includes a variety of entertainment with Diamond Minx (Vancouver’s Blonde Bombshell of Burlesque), live music from the Hyperacoustic Prog-Rock band Runaway Four (formerly Tasty Animals), sword fighting demonstrated by Academie Duello (video), magic, roaming medieval actors, a costume contest plus vendors of all types selling their goods and services that will bring out the nerd in all of us. This is an event not to be missed!
Nerdfest organizer Morgan Zentner comments:
“NerdFest is gearing up for it’s fourth year in Vancouver, BC this November 8th. Over the past 3 years we’ve had a variety of acts, vendors and performers with each year gaining more momentum than the last. With the help of a great group of volunteers, the Rickshaw Theatre staff and our generous sponsors, NerdFest IV will be the biggest event yet! This year we will have veteran performers The Whiskeydicks, Runaway Four (formerly Tasty Animals) and Academie Duello and we will be adding to the roster Diamond Minx, Mr YoYoThrower and more acts will be announced soon.  Of course we will have the ever popular costume contest so we encourage everyone to grab your favorite costume and join in the fun.”
Check them out on Facebook HERE.

Posted by Hammer Records at 9:40 AM