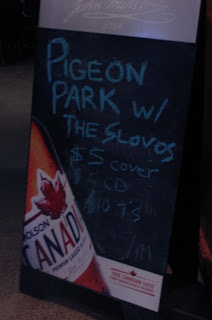 Pigeon Park At The Point! Now there is alliteration if i ever saw it. I caught this fantastic blues rock band in Port Coquitlam with a packed audience. Every show of these guy's I've been to have been to a huge and fantastic audience. It goes to show that the suburbs are where its at! This band is tight as TNA pants on a hooker! They played a double set with only a 15 minute break to show their endurance to their roaring audience. With a guest MC laying down some lyrics all their songs were unique, bold and dynamic. Catchy melodies, memorable choruses, bluesy guitar solo's... this is a band to see one day. Always a good time and solid party animals they will never leave the show without thanking as many audience members as they can find. 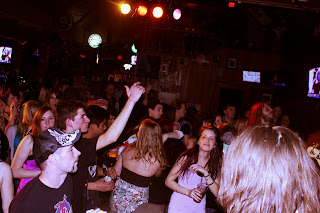 As a bonus they gave out some free copies of their new album and i managed to get my hands on it. A solid recording of their fantastically  written songs. Be sure to grab it if you can.
Hear them roar at:
http://www.myspace.com/pigeonparkband