Taking over the world 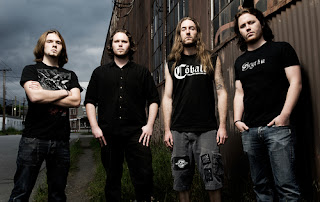 Heavyweights in the metal world, Titans Eve is embarking on a massive tour to support their debut album The Divine Equal. A gruelling 23 shows in two months all across the USA and Canada. Brian Gamblin (Guitar/Vocal) had this to say about the upcoming shows:

"Titans Eve is beyond excited to be embarking on The Divine Equal North American tour. We are hell bent on delivering a power house juggernaut of a live show for all of you, and to show the world that we are an unstoppable force capable of destroying stages across the continent. It is to be a two month outing, doubling last year's Burning Canada tour. I hope to see all of you metal heads out at our shows cause it's going to be one hell of a party."


The album is a masterpiece of metal. Very dynamic, lots of structure but flows from start to finish. Shredding licks, beautiful clean parts, larger than life drums, and a very refined shape of the sound. Heres the tour dates, more to come:


Be sure to catch them at the Rickshaw and hear them roar!
Posted by Hammer Records at 1:36 PM