A Wall Of Sound 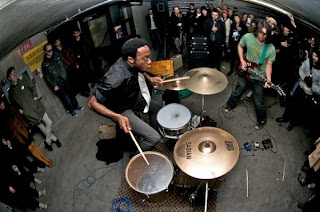 Boogie Monster. This band is a mixture of different genres ranging from alternative to thrash. Now both players are just monsters on their instruments. A video of the band shows the drummer just wailing on his drums as if he plans of breaking them getting huge sounds, and the guitarist just rocking da funk out. But there is no structure, no lyrics, no rhyme or reason behind the madness. Just sound for sounds sake. Cool riffs, but on their latest released LP entitled Zechimechi it sounds over compressed and too many things coming at you at once. Some very cool riffs in there and beats, but i would not want to crank this in my car for fear that my ears will bleed. Sorry guys, just not my thing. They seem to win over the audience in their videos so maybe ill try and check them out live.
But feel free to check out a track of theirs called Castle In The Clouds:

Castle In The Clouds by HammerRecords
Posted by Hammer Records at 5:48 PM