Lipdub is a video involving people lip-syncing to a song, and then dubbing it (inserting it) into the video. Now take that and involve a whole university. That is what UBC did, involving everything from a unicorn to Marianas Trench. They had their official video release at Robson Square on April 8th with two fantastic bands play a free show. 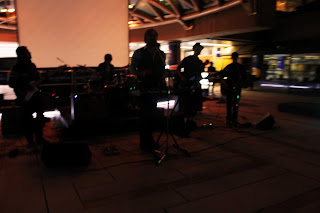 Free City Collective created one of my favorite local albums. I was very excited to see them start off the night with a bang! They played a solid set as the sound engineers and lighting crew fine tuned their set up. Ben (the lead singer) eagerly ran up to the large crowd forming halfway through their set inviting them to dance the night away. A group of supportive friends lead the way dancing up a storm. Upon their last song they had a large crowd gathered intrigued at the event unfolding in front of them. 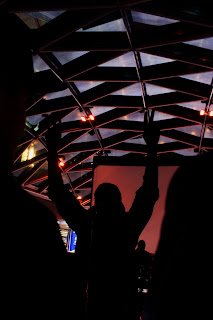 Panther and The Supafly, such an unusual name i didn't know what to expect. What ever image i had in my mind was blown away by this band and their amazing performance. A mixture of funk, hip-hop, ambient and rock, this band commanded the audience the minute they hit their first chord. The front man was such a strong character that when he called everyone up after the 2nd song the whole crowd moved in unison towards the stage. Groove after groove flowed over the audience as everyone danced, moved or even just nodded to the thick bass, tight drums and airy keyboards. Such rich melodies and harmonies my mind could not help but be drawn into the imaginary world they were painting with music. 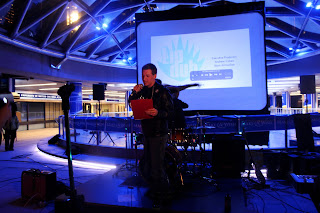 Once they had finished the stage was cleared for some quick speeches by leaders, directors and other officials to talk about the soon to be shown video. A quick "behind the scenes" video was shown about the making of the video which i found a bit confusing as we had yet to see the actual video. After a few more speeches the video was shown to cheers and applause from the audience. An amazing spectacle of coordination of a whole school, amazing film techniques and superb artistic vision. Watch Below to see the film.

And see the photos from the show at:
http://s1107.photobucket.com/albums/h384/HammerPhotoVan/Robson%20Square%20April%208th/
Posted by Hammer Records at 2:39 AM