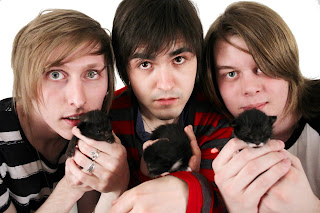 Halfway to Hollywood is right! This local Pop-Rock/PowerPop band from Vancouver, BC gave me the honour of reviewing their brand new, two-song EP, "Speechless," recorded in their private studio in March, and mixed by professional, Steve Klassen (These Kids Wear Crowns, Faber Drive) at the Sound Suite in Abbotsford just recently!

This new band gives off a very feel-good, relatable vibe. They have catchy lyrics and strong melodies and harmonies in both songs, with well put-together, energetic, instrumentals to back them up! Their sound is very Boys Like Girls meets Simple Plan, meets local Vancouver band - Fighting For Ithica. It's a VERY welcoming sound!

The first song, "Speechless," has very cute lyrics, strong vocals, and a catchy melody. Front man, Grant Walker's vocals and guitar are masterfully mixed with fellow band members' bass (Brenden White), keys and synths(Joey Levesque), lead guitar(Jacob Owen), drums(Graeme Hahn), and backing vocals(Brendan White and Jacob Owen). The track reminds me a lot of, "Five Minutes To Midnight," by Boys Like Girls. I could see myself dancing to this at a party, club, or live show any day!

Next up is, "Breakdown." Now, with a name like that, people might think it's going to be another one of those sad songs - but it isn't! This song is a very inspirational, heart-warming piece, with good phrasing and a tight sound. Right off the bat, the song starts on a soft, but major note, and kicks that up a notch thirteen seconds in with some great gang-vocals, and a full-instrument sound! The lyrics are very relatable to people of all ages, especially those going through a rough patch in their lives, who just need a little pick-me-up! (And who hasn't been there? I know I have!) Again, it's just one of those songs I can see myself dancing to all night, or rocking out to at a live show!

Though new to the scene, not having played any shows yet (though planning to either late July or early August), these guys have a strong following both on Facebook (http://www.facebook.com/HalfwayToHollywood) with 568 Likes, and on Twitter (http://www.twitter.com/HalfwayToHolly), with a whopping 2,945 followers!

To check out their debut EP, go their Facebook page, and hit the "music" tab on the left-hand side. http://www.facebook.com/HalfwayToHollywood