"Will You" Check Out Diamond Dancer? 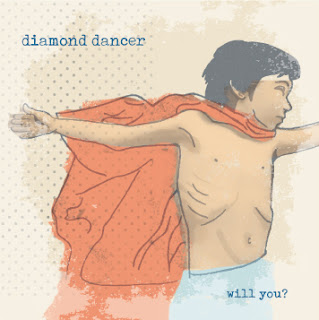 For anyone who likes bands such as Explosions In The Sky and/or Mineral, you will dig the sound of Diamond Dancer. I got the chance to hear their upcoming EP, "Will You?" before it drops tomorrow, July 26th. The album was recorded and mastered by super indie engineer, Stuart McKillop, at Raincity Records. The best way to describe their sound would be that they have "somber music accompanied by shy yet heartfelt vocals, singing in all seriousness about mundane problems." These were my thoughts on "Will You?"

The first track on the album is titled, "Only If You Believe In The Power Of Friendship." It is an instrumental piece with a soothing sound, and cool riffs and melodies. The end of the song leads right into the second track flawlessly. You'd almost think it just to be an extra long intro, but no, this is what we would call a "concept album." Where each song flows effortlessly into the next! Definitely a cool idea for a sound like this.

The next track is titled, "Lost In Echo Park." In this song, there are strong male vocals which intertwine melodically with that of the instruments. It's a really cool idea if you can pull it off well; which is exactly what they have done!

The third song is entitled, "Bellis Fair." The vocals in this song are very soft, and seem to have a very heartfelt feel. Again, the instruments have an almost "calming" sound to them. The members of this band seem to work magically together, to pull off that perfect 90s emo/emocore/indie rock-esque sound - which I believe is what they were aiming for!

Now the fourth song, "Sleepling In Mount Pleasant," surprised me for a moment when I heard a female vocalist. At first it was a little hard to hear her soft vocals, that blended in with the music in the background, but once I tuned my full attention on the song, I could easily pick out her vocals, and the lyrics she was singing.

The fifth and final track is "Long Distance Relationships Rarely Work Out." This track seemed a little daunting at first, being 7 minutes and 41 seconds long - but once I heard it, I could understand why! Diamond Dancer seemed to throw in all that they've got to offer in this song. With an intro of about 1min 10secs long, they showcased some beautiful instrumental work, and then the male vocals came in, nice and strong, and extremely emotive! They then traded off with the soft, melodic sound of the female vocals. Also, throughout the track they had a nice showcasing of "twinkly" guitar riffs, wicked drum beats, and just an overall great sound. Both heavier and softer. This is a track made for all to love!

For more on Diamond Dancer, check out their website, and Facebook Page!
You can also see them play live at Astoria tomorrow the 26th, alongside Pizza Sub (ex yousayparty) & Bath House (ex Doers)! OR, if you can't make that show so last minute, you can catch them at the Media Club on August 11th.
Until Next Time...

Get Hammered!
Roxy
Posted by Hammer Records at 3:18 PM