More Than Just A Pop Star 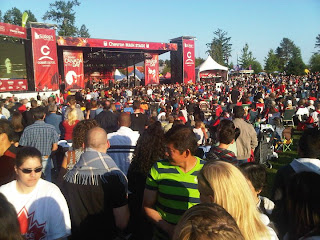 If you don't know who Elise Estrada is don't fret. You've probably heard a few of her tunes on the radio or seen her videos on much music. If your not into that music then ok, don't read this review. But she rocks. I have the pleasure of working for RockStar Music Corp which manages Elise Estrada and I get to record her in the studio and work with her on a weekly basis. She is one of the nicest people I've ever met. But she can sure rock a stage.

I had never seen an Elise Estrada show until Canada Day in Surrey. She sang right after The Latency and I didn't know what to expect. I assumed just another pop show, comes out, sings a couple songs, heads home. Her manager Adam H came out on stage and started to pump the crowd up with some cheers and chants. I have never seen anyone get a crowd that excited in any show I've ever been to. So after giving away a few Cds Elise came onto the stage and blasted into her set with some old classics, and new tunes off her new album. Some songs were mashed together so that they flowed into each other and only maybe had a chorus and a verse which was a great idea, kept the flow together but kept things fresh! She was great with the crowd, giving back every bit of attention she was receiving. During a few breaks she gave out a few more free cds and also a ring of hers and a couple bracelets she had on, making sure everyone who received them felt like family. After a great hour set she wrapped it up and thanked all her fans and headed off for a quick break and then going to the merch table to sign autographs.

I was filming the whole show with director Ali Visanji, who directed most of Elise's music videos. But after the show went to the merch tent to film her signing autographs and that was an experience. She made time for every single fan that came up to see her. It was about a 3 hour wait in line to get her to sign something to see her and she made sure to thank every fan, shake their hands, and give them a real smile. That's what i call quality!

She raised my idea about pop stars and how she is a real idol young singers/musicians can look up to and I hope you all can learn something! No matter how big or small you are, always make time for your fans. Without them, what are you doing it for?
Posted by Hammer Records at 12:49 AM