Been around the block.. then left the block entirerly 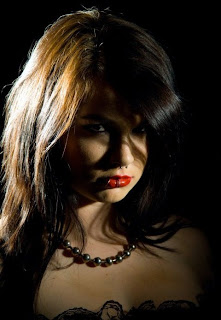 Handmade fame. It what a band needs to do now in order to gain momentum. Hard? well just ask the band Kill Matilda. They've made their own album, music videos, promotion, tours and even after all that decided to relocate to further their musical empire. Just their shear unity is mindboggling. Laying everything down on the line for music, not many bands can put in that commitment. I chatted with bassist Mykel Exner across Canada to learn their steps for success. Pay close attention class... you may learn something.

James: So can you give me a brief history? How did the band form? How did all this come about?
Mykel: In 2005 Mar and Dusty got together in an all girl band. In 2008 after a lot of turmoil and member changes I joined up and settled things down. We started playing shows in Vancouver pretty regularly that year as well. 2009 saw us record our EP. It was a DIY (do it yourself) effort. I engineered it with some help. Mar's boyfriend mixed it and we released it ourselves on itunes and all that. We toured western Canada promoting the album. It was awesome but we DROVE and DROVE just to play 9 shows. It felt like we drove for f*ckin ever! After that tour i wanted to come east and i started trying to convince the band. But we also needed strong promo material. So we made the She's A Killer music video.

J: I saw that video! it rocked! Tell me about the making of that video.
M: It was a lot of fun. It was another DIY effort. I worked at a video production company in Vancouver for almost 2 years and had made some great contacts. So after about 2 months of preproduction we finally were ready to shoot.

J: Any interesting tales from the making of the video?
M: It was a 22 hour day. F*cking cold! We shoot on November 1st. We did it on a dirt bike trail in Chiliwack . During Mar's guitar solo this dirt bike rips right through and we kept the take of her looking over the guy like "WTF", total death stare, it looked hot. When i toss the "dead girl" on the ground i was like f*ck.. i don't want to killer her for real. We didn't have a mattress or anything for her to land on. So i had to make ti look like i didn't care about this dead b*tch... but still didnt want to hurt that poor girl. Luckily we had like 18 people out that day helping. It was nice having a professional camera and DOP it was very professional. The video got rotation on MuchLoud and on MuchMusic.

J: Ya i heard that! Congrats! What happened next?
M: In 2010 we opened up for Powerman 5000 then toured across Canada and decided to stay in Montreal. Since we've been out east we've played a S*HITTONE of shows.

J: Whats the difference between over there and over here music wise?
M: Well.. Vancouver is pretty hard. There are not a lot of venues and a lot of bands trying to get shows. Out east there are a lot of venues so it's easier to get shows in bigger cities. In Vnacouver you can only really play once a month, here you can play all the cities that make up central canada. So you can play as much as you can afford gas to get there, if you have a good rep.

J: Tell me about the crowds there. Gaining lots of fans?
M: Oh ya, we've been killing audiences and getting lots of repeat shows. Crowds want us back and are very vocal about it. They are nuts! Dusty whips them into a frenzy and when we do come back, they remember and bring out more people. It seems easier than Vancouver from my perspective. Vancouver has a lot of competing things to do, like hiking, biking and outdoor stuff. Where as out this way people love to drink and rock the f*ck out. Even the media seems easier for us out here. We've been a feature listening in the Montreal Mirror which is like the Georgia Straight. We've been featured by websites and blogs. Where as in Vancouver it seemed nearly impossible to get any reviews or interviews. Here we are on the college and underground radio stations doing interviews every week it seems. Plus with our strong facebook presence we're gaining fans like crazy all over the states. Its been a great move but also have been very hard. We are missing a lot of close friends and family.

J: Wow sounds like you have it made out there! Any final advice for Vancouver bands?
M: When you get on stage.. give it all you've got. Your live shows is your best and biggest product. Don't hold back. People work hard for their money and deserve to see a show... especially if they pay 10 dollars to get in.. and then more for a beer. Make it worth their time for them. Then they will remember you. Oh, and content content content online!

Check out a video of them playing a recent show in Montreal!

Posted by Hammer Records at 3:43 AM