I'll order loud guitars, huge drums and a side of... Mongoose? 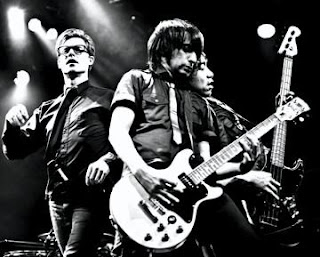 They're are plenty of good ol'fashion straight up rock&roll bands around Vancouver. Though a number of them deserve to stay playing the same old bars on Wednesdays nights... but some just blow your ear drum right out. Loud edgy guitars and dynamic vocals are the two things that stick out the most in my mind. One of my favorite tunes from their myspace is "Rock The Boat". Crunchy riffs with a melodic but also rhythmically interesting vocal line. Solid solo, nice and simple but ending with a few showy riffs. Its definitely a song i would love to belt out the lyrics at the top of my lungs.

The band has released not 1, not 2, not 3, but 6 albums!! Each more dynamic but still maintain their unique blend of straight up rock. They've played everywhere in Vancouver that live music has allowed them. They have shared the stage with Steel Panther and Clutch. Very talented players, but most importantly in my mind... they put on a show! None of this standing around. Its one thing to be playing solid riffs, but another thing to play killer riffs while jump kick! So grab a few buddies and check them out around Vancouver! They went to Japan last year but be sure to check out the this website and I'll let you know when their next show is! Expect something this summer!
Check out a video of them: