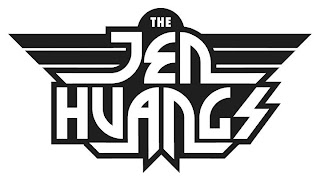 What does a stand up bass, an accordion and a trumpet have in common? Well you'd find them all being played by The Jen Huangs. I hung out with Robert Mattson and learned some interesting tales about the band. There unique sound caught my attention when i saw them rock the stage at Malones. Listen in to our conversation..

James: So how does a group so diverse like yours get together?
Robert: I met Matt (singer/bassist) at the Cobalt about 2 years ago. We had a lot of friends in common but never met. We talked about jamming and about two weeks later i phoned him up and asked him if he wanted to start a band.

J: so just like that he said yes?
R: Well we jammed once just the two of us and it went really well. Then we brought Patrick (accordion/Trumpet/Guitar) into the fold and lastly our drummer Ed joined.

J: Do you find having a trumpet player/accordion player really separates you from lots of bands in Vancouver?
R: A bit, but we're definitely not the only band with a trumpet or accordion. People usually seem really intrigued when they see the accordion though. And the fact that our bassist plays a stand up bass... people usually see that while we are setting up and decided to stick around to hear us.

J: That is definitely a nice visual aspect of your band. When i first saw you guys play that's what i noticed first. Any problems having a stand up bassist that also sings?
R: Not really. Matt's pretty talented and is a natural at both. He says he has problems with straight mic stands sometimes but besides that i wouldn't say he has anymore difficulty than if he played electric bass or guitar.

J: What has been your favorite moment with the band so far?
R: Well this one time we were playing this show at the Princeton, the other bands we were playing with had some members who were underage. The bar staff said "its ok for them to stay, but once they finish playing they need to go". So someone came up with the idea for EVERY member of EVERY band to be on stage during EVERYONE's set. Every band had shakers and small percussion instruments so everyone on stage was doing something. It was a cluster f*ck to say the least, but so much fun.

J: That sounds amazing! I wish i had seen that. Any shows coming up?
R: Ya! We have two big shows in early April. Ones an all ages show in Maple Ridge on April 1st with The Wrecktals, The Adherents and GSTS. Cover is $7.

J: And the second?
R: The second is at Pat's Pub with The Wrecktals again and Real Problems. As well there will be performances by Misty Graves Gorleque Spectacular. Its hard to explain but it's basically a horror themed burlesque show. We've worked with them before and it was insane! Cover is $10.

J: I'll definitely try and catch that one. I hear you are also working on an EP right now, details?
R: We are trying to have it done by July or August for sure. Everyone should watch out for this EP. We are recording it at the Arts Institue Of Vancouver with Erik Pontifex. He's a great guy and has been doing a lot for us.

Be sure to keep an ear open for their EP and catch those shows if your in the area. Check them out on facebook or myspace.