A night to be remembered

This was my first trip to the Tom Lee Music Hall. Ive heard about its great sound and amazing stage. Having just bought my new Canon T2i camera i was excited to test it out. 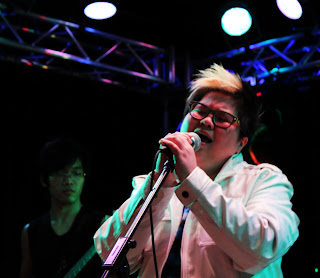 Compass Rose opened the night off. Classic Japanese rock style. Good riffs and solid singing. The drummer was playing an electric drum kit and everyone was using fairly small amps. It sounded good but lacked the punch that bigger amps and real drum kits give. The singer give a stronger performance and very personable towards the audience, smiling and waving, and giving lots of energy. The band behind her was less exciting. The lead guitarist was moving around a bit and enjoying himself, but the others were statues. They coverd a song by X Japan, a famous Japanese band. They warmed the crowd up for the main event... 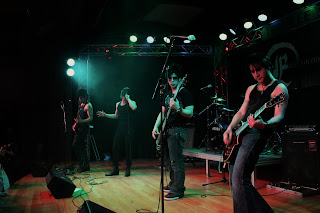 EVE (Ever vast Exemption) took to the stage and without hesitation blasted into their set. The whole crowd moved up front to see the band they all had come to see and they were not disappointed. If you look up presence in the dictionary you just see a picture of EVE. They played hard and captured all ears in the hall. Moved around the stage drawing every eyeball to follow them. Marshall half stacks on either end of the stage pumping out heavy guitar sounds. With a set of songs that everyone knew and a few covers thrown in they blew the audience away. Three quarters through their set the singer took a moment to read a letter to the crowd expressing his love and gratitude to all of them for being loving fans for all the years. They finished off with a couple more songs and guitar solos. Then bid their loving fan a last fond farewell. 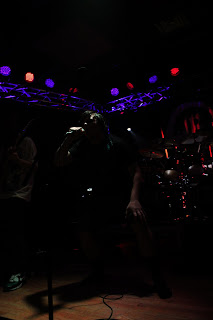 As some of the crowd left to go home, Xenocide started to set up. Being last is never a good position unless you know your audience wants to hear you. Xenocide played tight trash metal but surprisingly fell on deaf ears to the EVE crowd. That's not saying they didn't have their supporters though. A small but passionate group of metal heads stayed and moshed. One girl in particular headbanged so much i thought her head would fall off. Sick band, just got what the crowd was looking for that night.