A man of few words gets straight to the point 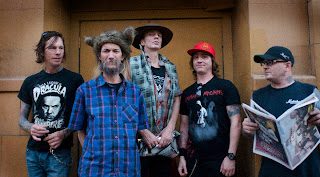 S... N.... F.....U... legendary punk band. Canadian Punk. Vancouver Punk. If you don't know this band then you should not call yourself a Vancouverite. Even if your not into punk you still have to respect them. Formed in 1981 they spearheaded the punk scene. I chatted with Just Denis about the scene back then compared to now. After this conversation i felt wiser.. listen up!

J: Why did you start playing bass?
D: Because i thought it would be easy. And i sucked as a drummer.

J: Spoken like a true bass player. Have you seen a huge change in the scene from when you started to now a days?
D: Ya. Justin Bieber hair and guyliner. White leather jackets on dudes... not cool. Bald heads and goatees on metal dudes was a no-no in the 80's. And punk was unnoticed at all thank you Green Day and The Offpsring. Changed everything.

J: Do you think its easier being a punk band now than it was back then?
D: Oh yes. It has become marketable thanks to Epitaph but it ruined the originality of it all. Bands all sound the same now. NOFX etc.. etc.. all sound the same. Not like back in the 70's or 80's. 3 chords and you knew who the band was. Now a days it's all a blur.

J: Very true. Do you still go out and see shows around town?
D: I do if i like the band or the guys in it. There is no scene if you don't support. That is the problem with the Vancouver scene. Metal is metal and punk is punk. Opposing scenes instead of banding together and making it better. They would rather be music snobs. I am a crossover kid. I love it all.

J: What bands around town do you go out and see?
D: Tough call. I just go out and see whats shakin. I don't look directly. I just explore. But Zimmers Hole, Bison BC and Life Against Death... those guys can actually play.

J: Good bands! I actually jammed next to Bison BC and in the same room as Life Against Death. Great bands. What about local punk?
D: There are no really good punk bands in van. Maybe Uptown Riot.

J: What do you think of most Vancouver bands?
D: Vancouver right now is a haven for clone bands. All jumping the band wagon on what ever is cool at the moment. So it is a little lacking. All clones of each other. But it is an age thing, all of us 40 and overs had different influences then.

J: Any words of wisdom for young Vancouver bands?
D: Embrace the old stuff. It is classic for a reason.  Misfits, Ramones, Angry Samoans, old Metallica, Slayer, list goes on and on. Even SNFU the 1st album is a classic. No collection is complete without it.
Posted by Hammer Records at 3:34 PM