Admitted To The Dead Asylum 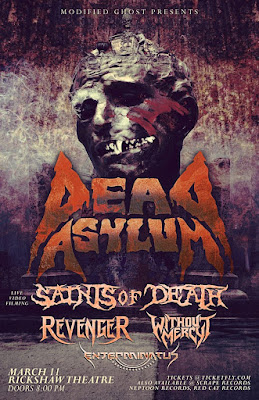 March 11th saw the Rickshaw theater have another amazing, all local metal show, that really puts a smile on a fans face. With promoters such a Modified Ghost and local talent the  metal scene has been steadily growing, noticable even with the one short year I have lived here.
First band of the night goes by the name of Exterminatus. A tech death band with what seemed to have all the lyrics based off the tabletop game Warhammer 40k. So immediately the nerd in me loves this bands concept. As a whole I found this bands music really quite good, perfect mix of technical and melodic guitar sections. Nothing really new just good ole brutal death metal. Good opener, pretty slow show though. Their live set didnt match the music I was listening to and I found my mind more wandering to what t-shirts i'm going to buy later. Though it is what you expect with an opening act, and at the end of their set their drummer dedicated their show to his gandma who had passed earlier that week. So i'm sure anyone reading this is with me when I say, "May she rest in peace brother"
6/10 Hammers goes to Exterminatus
Next up was a band that frankly was the biggest suprise for me. I had never heard of this band before and frankly im disappointed in myself for not hearing of them until now, Without Mercy. Immediatetly this band captivated me. They demanded and kept my attention their whole set. They played a textbook show. I really had a hard time finding anything wrong with their show as I was hit with hard hitting song after hard hitting song. Serious if you're a fan of the band Aborted you  will love these guys. As I said suprise of the night and I will keep my eye out for these guys. Great job.
7/10 Hammers goes out to Without Mercy
Third band up and another big suprise of the night. Revenger, a raw true metal band that has to put on one of the most fun shows i've seen from local talent. What is going on Vancouver? How are bands like these last two not pulling in bigger crowds. As far as im concerned they've been pulling out better shows then alot of the touring acts i've been seeing in the city. Revenger is seriously one of those bands that you can't get sick of seeing. Extremely interactive set, raw metal and just a hell of alot of fun. Keep your eyes out for these guys and go to their show. Trust me, you will not be disappointed.
8/10 Hammers to Revenger
Co-headlining the show and next up to bat was Saints of Death. Now this is a band i've been hearing alot of buzz from. Even had friends make sure I heard their albums before I went as saw them. Though sadly I think that worked against the band. With all the hype I was hearing and their albums I was listening too, I went in with high expectations for this band. Though not a bad set I found that they didn't quite reach the standard I had imagined for them. Twan Holliday, bassist and lead vocalist, demanded your attention as the guy towered over you on the stage. Also one of the things I loved was that their guitar player Phill Henri reminded me exactly like Angus Young, with the way he moved on stage. All in all decent show, and I will be going to another one of their shows for sure.
7/10 Hammers To Saints of Death
Last on is a band that has officially become my favorite local band, Dead Asylum. What can I say about these guys that I haven't in the last review I did for them. This time I even told them I was going to be extremely tough on them, and what do they do? Stepped up to the plate and threw down a HUGE set. From beginning to end they never falter, they move the whole time and really draw you into their music. Thoroughly impressed with this band, and then to add to their music the whole band is really humble and very professional. Dead Asylum is the example for any other local death metal bands to follow. Great job!


10/10 Hammers (Don't know how i'm going to review them again without any biast towards them cause i'm a fan)
Posted by Unknown at 7:05 PM