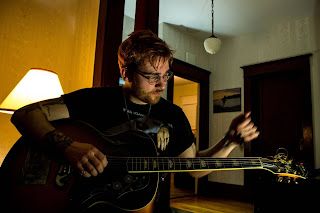 Hailing from Saint John, David R. Elliott is going to be performing at Canadian Music Week. We had a nice few words with him about his upcoming performance.

Hammer Records: Tell us what you think of when you think Canadian Music?
David: Kardinal Offishal, Drake, Shania Twain, Plaskett.  I dunno, I feel like Canadian music often suffers from little brother syndrome with american music so I really like the stuff that really takes hold of its' own identity, like Stompin Tom for instance, and definitely Kard, and Cadence Weapon.  I also just think of my friends, most of whom are making canadian music right now.

Hammer Records: How did you get involved in Canadian Music Week?
David: I know some musicians that have played before and when I saw that applications were open I thought I'd apply. Always fun to play in Toronto and if you can get more involved in the industry a tad while you're there you probly should.

Hammer Records: What do you have planned for Canadian Music Week?
David: My show is about beautiful pop songs and weird context for them.  We play with the crowd and try to get them involved, but mainly were trying to create an emotional connection with the audience by performing without pretension.

Hammer Records: What message do you want to send to Canadians listening to your music?
David: This is pop music in a really unspecific way, and its meant for everyone.

Hammer Records: Whats coming up for you?
David: My new EP is called A Million Statues and it comes out in April, and then in the fall ill be releasing my next full length album, Common St. Ill be touring for both releases so if you wanna check out my last album and keep up with the new stuff you can like my page at Facebook.com/davidrfcs and follow me on Twitter @davidrfromsj and you can listen to my music at davidrelliott.bandcamp.com!
Posted by Unknown at 5:05 PM