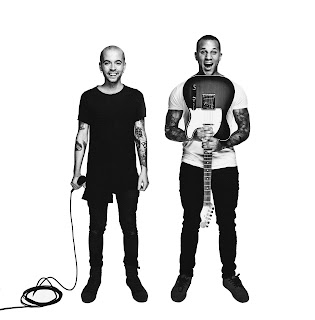 Duos are becoming more and more popular in todays music. Groups don't need a large number of players to put on a killer show. Keek is a great example about taking music to a new level. We had a quick chat with them about their upcoming show at Canadian Music Week.

Hammer Records: Tell us what you think of when you think Canadian Music?
Keek: There's such a wide range of artists in Canada from the classics (Brian Adams, Kim Mitchell, & April Wine) to todays chart toppers (Shawn Mendes, Drake, & Justin Bieber), all artists, of many styles, just creating relatable music people can vibe to. We aim to write our music just like that. Canadian music is music we are proud to be a part of.

Hammer Records: How did you get involved in Canadian Music Week?
Keek: When we started "KEEK", CMW was one of the first festivals we were told to be a part of. So we submitted our package and got in! It's a fun, educational event. There are so many awesome acts from around the world and a bunch of workshops to check out! We have been very lucky and honoured to be a part of CMW 3 times! We are super excited to play again this year.

Hammer Records: What do you have planned for Canadian Music Week?
Keek: Anyone who's been following the band since day one will be in for a huge surprise this year. Besides that, we'll be bringing the usual Keek vibe: A show consisting of upbeat-danceable-pop tunes. We'll be bringing a tonne of energy. Make sure you bring your dancing shoes, and your singing voice.

Hammer Records: What message do you want to send to Canadians listening to your music?
Keek: We're just some regular dudes writing, recording, and performing catchy tunes. The whole reason we make the music we make is because it's fun and makes us happy. All we want is to pass that on to anyone listening to "Keek".

Hammer Records: Whats coming up for you?
Keek: We're stoked to be releasing some new music. We've been working in the studio all year writing and recording. We've got 3 singles we'll be releasing this year with the first single "Gonna Love You" dropping before CMW. Make sure you check our social media for upcoming shows near you!