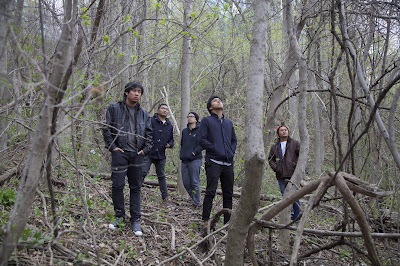 Coming all the way from Jakarta, Lightcraft is planning to spread their music to Canadian Music Week. We exchanged some words about their upcoming performance.

Hammer Records: Tell us what you think of when you think Canadian Music?
Lightcraft: It conjures up images of snow, picturesque lakes, Bryan Adams, Neil Young, The Juno Awards, and the cities of Montreal, Toronto, and Vancouver. We're huge fans of a number of Canadian acts, from the likes of The Stills, Hot Hot Heat, Arcade Fire, The Dears, Stars and so on. However, two acts that have influenced us a great deal are In-Flight Safety and Surface Of Atlantic. And let's not forget that Canada gave us the likes of Celine Dion, Justin Bieber, Michael Buble, Feist, and Drake too - great names in the global music industry, although we don't really listen to the musical output of the first three, mind you.

Hammer Records: How did you get involved in Canadian Music Week?
Lightcraft: We first knew about Canadian Music Week from the Internet. And then we applied via a gig-sourcing website for last year's edition, which we successfully were invited to. We had such an amazing time at CMW 2015, so much so that we decided to try again for this year. Who would've thought that we would be called upon again for the second consecutive year? And we're from Indonesia too, so we're very grateful and proud of it.

Hammer Records: What do you have planned for Canadian Music Week?
Lightcraft: The fact that we're an Indonesian band is already pretty unique, but the most important thing is that we're just going to try our best. We might possibly inject a little bit of our traditional music into the mix, and just show that despite our un-Indonesian sound, there's still something different that we could bring to the table.

Hammer Records: What message do you want to send to Canadians listening to your music?
Lightcraft: Our Canadian friends, when you listen to our music, you have to listen to it more than just the once. And you have to listen with your heart as well, and let it connect with your emotions. It's all about tugging the heartstrings.

Hammer Records: Whats coming up for you?
Lightcraft: We're currently recording a brand-new five-song EP, which we hope would be finished before we head to North America so that we could bring them over to Canada. The EP will serve as a stopgap release before we get to work on our third album sometime during the third quarter of this year. As for upcoming tours, we have a couple of dates in Singapore this month, before we head out to the States for the very first time in the band's lifetime in late April for (hopefully) a few dates alongside our showcase at LAUNCH Music Conference & Festival. And then we'll travel up north for CMW! You can find our music on iTunes Store, Spotify, Deezer, and the likes. You can also listen to them from our Soundcloud page at soundcloud.com/lightcraft, or Bandcamp page at lightcraft.bandcamp.com. Oh, and there are loads of live videos and a number of official music videos of our singles over on our YouTube page at www.youtube.com/user/lightcraft videos, which I hope you could subscribe to! As for social media links, please like/follow us on Instagram (www.instagram.com/lightcraftmusic), Twitter (twitter.com/lightcraftmusic), and Facebook (www.facebook.com/lightcraftmusic)!
Posted by Unknown at 10:47 PM