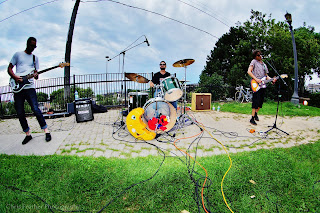 Hormoans are a trio from Toronto. This fun group of dudes will be performing at Canadian Music Week, we spoke with Cyrus, Matt and Steve about their upcoming performance.

Hammer Records: Tell us what you think of when you think Canadian Music?

Cyrus - When I think of Canadian music, I think "Unique".  There are so many creative/talented musicians in Canada and the reputation is spreading and becoming well known.

Matt - When I think of Canadian Music I think of artists such as Neal Young, Leonard Cohen, Joni Mitchell, Bryan Adams, The Tragically Hip, Broken Social Scene, Alanis Morisette and Arcade Fire just to name a few. I also think of it having diverse influences because Canada is so diverse in its culture.
Steve - To me the term "Canadian Music" has come to represent a mixed bag of dedicated grassroots musicians who sometimes play it safe but sometimes push the envelope and are secretly influenced by a myriad of pop culture references from both Europe and the United States. When I turn on the radio in Toronto and hear the strictly regulated 30% CANCON sanctions, I generally enjoy 5% of what I hear. That said, I realize that Canadian music - though sprouting from many diverse cultures - is ironically lacking and suffering from a collective identity crisis that extends to each generation of young musicians and widens our existence within a culturally deprived vacuum.

Hammer Records: How did you get involved in Canadian Music Week?

Matt - We played CMW once before and had a great time being a part of such a huge thing in Canadian music history. We got involved again this year hoping to have an even better experience, make new contacts and play in front of new people.
Cy - We have been involved for years.  When we first played, it was at the smallest bar possible in Kensington at 2am.  Now that's real rock and roll.
Steve - We were flattered when asked to play the festival a few years ago, surprised by the venue and have continued to play it ever since.

Hammer Records: What do you have planned for Canadian Music Week?

Matt - We are hoping to have a new song ready to debut at CMW, something that really cooks!

Cy - We always try to be entertaining.  I would like pyrotechnics, however with our budget, two lighters and a flammable sock will have to do.
Steve - Two words: Pinata party.

Hammer Records: What message do you want to send to Canadians listening to your music?

Matt - To all the Canadians listening to our Music, thank you for listening and we hope you enjoy our sound and we want you to continue listening and buying our CD's
Cy - Please support your local musicians.  There are so many hidden talents that could be big if given a chance. Be true to your sound - instead of being told what is good or bad.
Steve - There are secret messages in our music. Listen more intently.


Matt - We are going to be working on new material in the near future. We have a few shows coming up in Toronto and a new video coming out in the spring/summer.
Cy - We always have show happening.  March 12th @ the Smiling Buddha is our next. Just finished our second album 'SLANDER'.  We have a video done and a second video for this album being edited at the moment.
Steve - We have a lot planned for 2016 - a couple shows coming up, one on APRIL 30th @ The SIlver Dollar w/ The Noise FM and Archie Powell & the Exports from Chicago. We are also playing an in-store appearance at a small independent record store on Bloor st. in a couple months and hoping to tour this summer. Starting to write new material for an upcoming EP and preparing to release a new music video for our second single off of our new record. It's called "Only One".  You can find out everything you need to know about HORMOANS here: