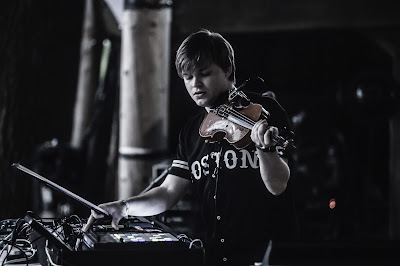 Death has mixed Irish fiddle and electronic music together and it sounds amazing. Just watching some of his live videos you can really see his methods just flowing into one another. We chatted with him about his upcoming performance at Canadian Music Week.

Hammer Records: Tell us what you think of when you think Canadian Music?
Daithi: This is my second time playing at CMW, I played there a few years ago when I was starting out. I think, like any music industry showcase, it's very hard to stand out when there are so many acts playing at the same time, but when you really put the work in and focus on exact people you want to go to your show, you can get a lot out of it. On a personal note, It's a great opportunity to go to another continent, and explore somewhere new.

Hammer Records: How did you get involved in Canadian Music Week?
Daithi: I have just released a new EP which is doing fairly well here in Ireland, and 'Music From Ireland' a government body here dedicated to promoting our music scene abroad put my name forward for CMW. They do a great job, and have been a huge help to me throughout my career.

Hammer Records: What do you have planned for Canadian Music Week?
Daithi: The Irish showcase will be a really big one this year, as CMW are making it the focus of their festival. There are several great acts from Ireland going over, so I'd encourage you to check that one out. Other than that I want to play a few more times, and head to some of the discussions, which I found really helpful last time around.

Hammer Records: What message do you want to send to Canadians listening to your music?
Daithi: My new EP Tribes is inspired by where I'm from, the west of Ireland. It's based in Dance music, but includes recordings of nature, old Irish history and culture mixed into the music. My live show consists of me looping Irish fiddle over house music, and it's a lot of fun.

Hammer Records: Whats coming up for you?
Daithi: I'm currently touring Ireland with my new EP which was released a few weeks ago, and building up for the festival season over here. after that I want to travel from the top of Ireland to the bottom, recording my own unique sample library, to build my next EP.
Posted by Unknown at 5:38 PM